W is for Wolverine. 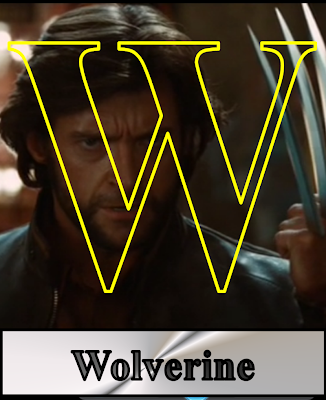 What more do you want me to say?

He's one of the most popular characters in all of comic books. Sometimes they throw him in another character's book and slap him on the cover just to make a few extra sales. He's appeared in movies, cartoons, video games, and every conceivable piece of officially-licensed merchandise Marvel has ever created. He's a terrific character weighed down by his own popularity and Marvel's penchant for overexposure.

And he's also worn several different costumes (Crimsonstreak's gonna kill me for that) throughout his storied tenure. Find out more about them here.

Tomorrow: They complement Wolverine, but he doesn't usually compliment them.

V is for Villains
U is for Uniform
T is for The Tick
S is for Spider-Man
R is for Robin
Q is for The Question
P is for The Punisher
O is for Origin Story
N is for Nite Owl
M is for Metropolis
L is for Lois Lane
K is for Kal-El
J is for J'onn J'onzz
I is for Iron Man
H is for the Human Bullet
G is for Green Lantern
F is for the Flash
E is for Events
D is for Dr. Fate
C is for Captain America
B is for Batman
A is for The Avengers
Posted by Matt Adams at 8:00 AM