P is for the Punisher. 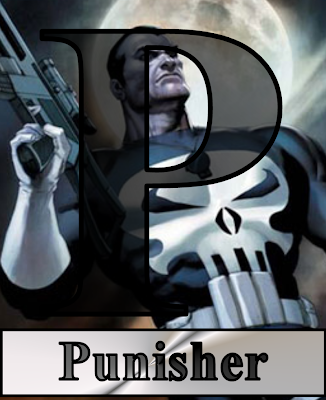 Frank Castle is proof that you don't need superhuman abilities (or a mask!) to fight the bad guys. Guns, knives, explosives, more guns, more knives, and more explosives will get the job done just fine.

The Punisher is an antihero, a "good" guy who gives just as viciously as the bad guys. He's known for the merciless employment of extortion, killing, extreme violence, and torture. He has a good reason for this, of course...the Punisher watched the mob kill his entire family. On that day, Frank Castle died, replaced by a gun-toting vigilante who rose to fight criminals by any means necessary...and if that meant getting his hands dirty, then so be it.

Oh, and there was that one time he wiped out the entire Marvel Universe.

Sadly, the Punisher's movie history can be summed up as follows: 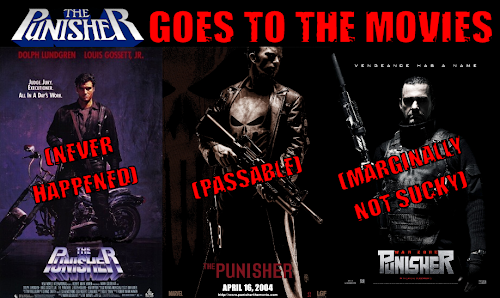 O is for Origin Story
N is for Nite Owl
M is for Metropolis
L is for Lois Lane
K is for Kal-El
J is for J'onn J'onzz
I is for Iron Man
H is for the Human Bullet
G is for Green Lantern
F is for the Flash
E is for Events
D is for Dr. Fate
C is for Captain America
B is for Batman
A is for The Avengers
Posted by Matt Adams at 2:04 AM