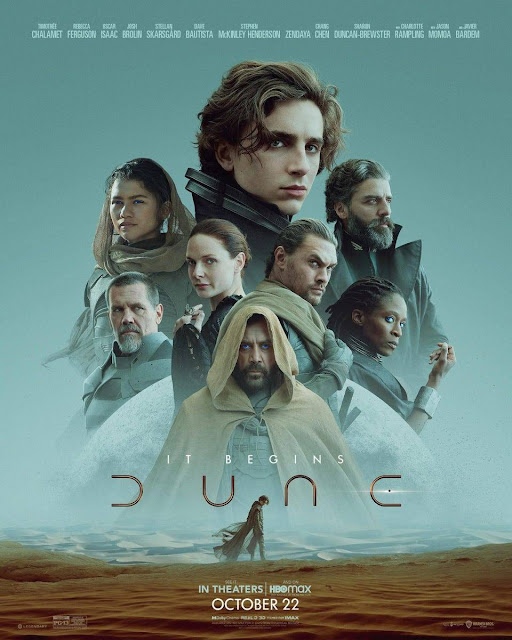 The new movie is a beautifully realized adaptation of an intensely weird book. I'm a late comer to Dune, having read the original novel last year at the urging of a friend. I thoroughly enjoyed the book. It's dense and strange and just throws you into the deep end of the pool. Dune does not hold your hand; it simply starts throwing terms like "Bene Gesserit," "Kwisatz Haderach," "sietch," and "stillsuit" at you and expects you to catch up.

I really liked it. I haven't read any of the sequels, but I probably will. I may even re-read the original.

The new movie, out in theaters and HBO Max (to the director's chagrin) at the time of this writing, boasts a stellar cast, excellent cinematography, and stunning visuals. It attempts to streamline the plot, as movie adaptations often do, and the film suffers a bit in character work as a result. That said, it's amazing how much of Dune (the title card says Dune: Part One and Dune: Part Two got the green light on the day of this writing) the movie managed to pack into its 2 hours and 35 minutes.

Some characters and subplots are omitted or disappear entirely. Gone is some of the political intrigue. Important characters like Gurney Halleck and Thufir Hawat aren't necessarily major players here. We don't learn about mentats or delve too much into the Imperium and its emperor. Dr. Yueh, another critical character, also loses out a bit. A little more development with him would ground his eventual actions.

But these are fairly standard sacrifices of adapting a novel to the big screen. Movies don't let you get into the heads of characters; they must tell their stories in broad strokes and often without much nuance. Some things are inevitably lost in translation, and I believe Denis Villeneuve did an excellent job of distilling the book into its essential elements.

I was extremely relieved to learn we're getting a second movie (due October 2023), as the first one ends with so much unresolved. Some viewers will find it jarring when the credits roll. They'll lament the lack of screen time for Zendaya's Chani. Even the antagonists, the Harkonnens, don't get a whole lot of development.

Dune certainly isn't perfect, as I've made it clear. It is, however, a stunning achievement that manages to find a little heart among the heady concepts and themes. And Duncan Idaho fought like a demon.

Find a spoiler-filled podcast below:

Posted by Matt Adams at 9:54 PM No comments: