As the Horseshoe Burns 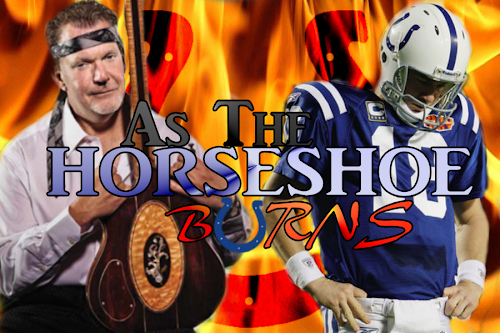 Once, not so long ago, my Indianapolis Colts were a model of sanity and stability in the NFL. However, we all know that NFL really stands for "Not For Long" (or "No Fun League" if you're a flamboyant wide receiver). This perfect union can't withstand the Peytonpocaplypse or Jim Irsay's Twitter account, and as the March 8th roster bonus deadline creeps ever closer, the Irsay-Manning media feud marches on with its soap opera machinations.

Just weeks ago, Jim Irsay referred to Peyton Manning as "a politician." We all know Manning is obsessed with his public persona, so the statement rang true. That does not, however, mean that it needed to be said. Irsay should've risen above the fray, yet his ego apparently wouldn't allow it.

The latest twist comes as Irsay does some politicking of his own. This time, he says the ball is totally in Peyton's hands. Manning can remain a Colt as long as he wants to remain a Colt...and if he's willing to restructure his deal so that gambling on Peyton Manning won't force the Colts to mortgage their inevitable post-Peyton future.

So basically, Irsay's telling everyone that if Peyton fails to stay with the Colts, it's Manning's own choice. Thus, Irsay is essentially saying "it's not my decision" and deflecting criticism from himself and the mismanagement of this entire bitter saga.

His utter refusal to just make a decision is absolutely maddening. On the other hand, that $28 million is pretty much just stealing money, especially if Peyton isn't able to play. I guess if Manning really does want to stay in Indianapolis, he'll sign a new deal that will prevent the franchise from doing a first-class Titanic toward insignificance.

I'd love it if both these guys could take the high road and find a way to make things work.

I guess we'll find out...as the Horseshoe burns.
Posted by Matt Adams at 3:08 AM