I just finished Walter Isaacson's biography on Steve Jobs. I'm not going to write a review of it, but I wanted to weigh in on a few things I discovered about the late founder of Apple. 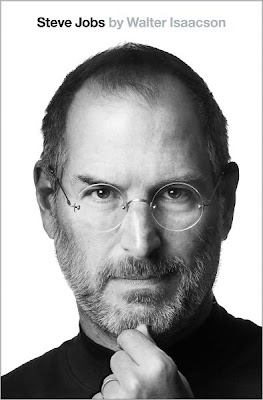 Let me start this by saying I'm not an Apple fanatic. I had an iPhone, loved it, and then went to Android (and wish I'd upgraded my iPhone!). I have always been a PC guy, having never warmed up to the quirks of the Mac platform and Apple's (cough) somewhat steep hardware prices. That said, I admire the Apple brand and what the company has achieved over its enduring tenure.

Steve Jobs was a raging a-hole. If there's something that the book assails the reader with, it's that Jobs was an uncompromising perfectionist. In his pursuit of great product design, he berated nearly everyone around him with strings of expletives and considered most people not named Steve Jobs to be idiots. He wasn't afraid to tell people that he thought they were morons and often held grudges over the most trivial slight.

Steve Jobs cried. A lot. This amazed me. While Jobs was strutting around Cupertino telling people their designs were aesthetic or engineering "shit" (his words, not mine!), the guy cried a lot. It seemed like every other page that Steve Jobs was "crying" or "weeping" or "tearing up." When people bit back at him or he didn't get his way, he would yell at them or start crying like a three-year-old boy whose mother wouldn't let him buy a new toy at the store.

Steve Jobs liked it when you stood up to him. If you made him yell or cry, odds are Jobs would respect you for standing up to him. This, of course, varied from case to case, but he admired people who were bold enough to tell him "no" or make him realize he was being a raging lunatic.

Steve Jobs would not have been a good Old Spice spokesman. This applies mostly to his earlier days. For a while, Jobs subscribed to the idea that his "fruitarian" diet cleansed his bodies of impurities and eliminated body odor. Thus, he would bathe/shower once a week and wouldn't wear deodorant. During his early days at Atari and Apple, this didn't go over well.

Steve Jobs wants you to drop acid. Jobs viewed himself as part of the counterculture, and took some LSD trips in his younger days. He says the experiences opened his mind to possibilities and recommended that everyone do the same thing at some point in life. He continued to be rather proud of his LSD use, years after it stopped.

Steve Jobs hated Microsoft, but knew he needed help to keep Apple alive. Jobs believed in vertical integration; that a company should control every part of the user experience. It's why you can't change a battery in an iPhone or iPad. It's why Jobs lost the great PC War...IBM allowed other companies to "clone" its computing technology while Apple did not. When Jobs returned to Apple after exile, the company needed a lifeline. It ended up being a promise from Microsoft to make software for the Mac platform, a deal that saved Apple and allowed it to eventually become one of history's iconic brands.

Steve Jobs saw the world in black and white. Well, okay, really Jobs saw it in the following continuum: "amazing" and "shit." He had a binary view of the world in which something was either The Greatest Thing Ever or The Worst Thing Ever. People were either "geniuses" or "shitheads" (and the same person could be both in the same day).

Steve Jobs believed what he said, even if it wasn't remotely true. One of Jobs' signature traits was the "reality distortion field." This strange phenomenon allowed Jobs to state "facts" that weren't true and predict things would come to pass, even when it looked like they couldn't happen. His ability to distort reality (and sometimes ignore harsh truths) could be both jarring and inspiring. If engineers told Jobs there was no way they'd make a deadline, he'd tell them they would and, by golly, they would. It was like the Jedi Mind Trick. He was also fond of making up "facts" and believing them to be "facts" even if they were patently false.

Steve Jobs envisioned the iPad first, but produced the iPhone instead. This isn't a revelation by any means, but Jobs unleashed the iPhone on the world even though the iPad was in the beginning stages first. Jobs was afraid the mobile phone market could potentially undercut Apple's iPod, which had become a cash cow. So Jobs envisioned a device that would be a portable music player, handheld computer, and mobile phone. Finding the right interface for the device was difficult...until Jobs recalled the multi-touch display being developed for a tablet computer. The iPhone, of course, became Apple's fastest-selling product...until the iPad leapfrogged it.

Steve Jobs believed in...I'm not sure what he believed in. Jobs met with many spiritual leaders and read several books related to Eastern religion and mysticism. In typical Jobs fashion, he followed his own kind of Zen Buddhism that involved yelling at people and crying a lot. He struggled with his fiery temper and the need for a calming force in his life, and in my opinion, was never able to quite reconcile the two opposing forces.

Steve Jobs had a tremendous design sense. Jobs could've been a good engineer; he certainly had the smarts for it. However, the actual engineering work seemed to bore him. Instead, Jobs spent most of his time obsessing over the most trivial details for his products. The slope of a curve, the degree of an angle, the balance of a device...these were the things that infatuated him. When others wanted to take shortcuts in manufacturing costs or engineering tradeoffs, Jobs wouldn't allow it. He understood how to make a mass-produced product feel intimate and handmade.

Steve Jobs knew how to show people what they wanted. The Macintosh was a revolutionary product, and it put Apple on the map. However, a series of technological and marketing leaps during Jobs' Second Apple Coming transformed the brand into a global titan. "No one's going to pay $400 for an iPod," analysts would say. Then Jobs would take the stage, introduce this "1,000 songs in your pocket," and suddenly everyone wanted one. Needed one. Same thing with the iPhone. "No one's going to pay $600 for a phone, never mind the data plan." Yet, when Jobs appeared to unveil his "three in one" iPhone (iPod, phone, and internet-enabled device), few could resist the allure. Jobs had a way of convincing customers that they had to have his products.

Steve Jobs gave us Toy Story. Well, okay, John Lasseter did that. However, Pixar wouldn't have flourished without Jobs' intuitive guidance. He managed this company differently from Apple and NeXT...giving Pixar's artists their space to create. He nurtured Pixar's desire to make computer-animated movies, kept money flowing in the darkest times, and fought battles with Disney over how the company was being managed. Toy Story became a major hit in 1995...and Pixar has enjoyed an unbroken string of creative triumphs ever since.

Steve Jobs wasn't always right. Jobs believed in everything he did, and if he didn't believe in something, he knew better than to push it. That doesn't mean he was perfect, however. His insistence on putting a slot drive in iMacs instead of a disc tray put Apple way behind the CD burning craze of the late 90s/early 2000s (this would work out, though, because Apple would leap over the competition with the iPod, a product that more than made up for lost ground). Jobs' NeXTcube computer was not the right product at the right time. The Apple III and Lisa models were disasters for Apple in 80s. MobileMe was a dud as well. Let's not forget the man was fired from the company he created in his garage! Yet Jobs had the uncanny ability to bounce back and forge ahead...character traits that made him great.
Posted by Matt Adams at 2:18 AM