V is for Villains. 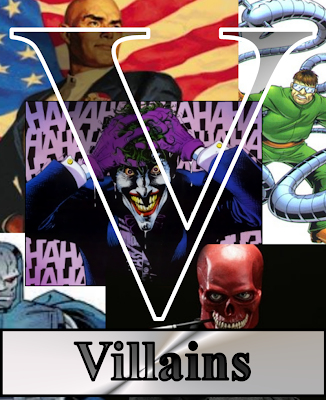 Newton's Third Law: For every action, there is an equal and opposite reaction.

You may as well call that the First Law of Comic Books.

Heroes must have a purpose. Sometimes that purpose is fairly vague (stop crime). Most of the time that purpose is a little more specific (stop the Joker's bomb). Heroes and Villains are two sides of the same coin. How close to the edge does Batman come to being a villain? Under different circumstances, couldn't the Joker have chosen to turn his misfortune into something positive? (a stretch, that one, but you get my point)

Superheroes usually have an arch-nemesis...someone who mirrors them in some way (the movie Unbreakable has a nice deconstruction of this). A hero without a villain isn't very interesting (see the Green Lantern movie...who was the bad guy? Why should we care? Oh...what was that? You didn't?). Batman and the Joker embody a great hero-villain dynamic. Near the end of The Dark Knight, the Joker remarks:


You just couldn’t let me go could you? This is what happens when an unstoppable force meets an immovable object. You truly are incorruptible aren’t you? You won’t kill me out of some misplaced sense of self-righteousness, and I won’t kill you because you’re just too much fun. I think you and I are destined to do this forever.

The Joker is an agent of chaos, the force Batman is fighting. In X-Men, Professor Charles Xavier and Eric Lensherr have diametrically opposed views on the relationship between humans and mutants. Their philosophical differences create a rift that turns one into a hero (Professor X) and the other into a villain (Magneto). Superman stands for "Truth, Justice, and the American Way" while Lex Luthor is willing to get his way through subterfuge, greed, and graft.

Let's admit one thing: Heroes can be bland. Their devotion to virtue and saving the day can become tiresome. Thus, we see the need for colorful villains to drive the story and give the hero tangible goals.

U is for Uniform
T is for The Tick
S is for Spider-Man
R is for Robin
Q is for The Question
P is for The Punisher
O is for Origin Story
N is for Nite Owl
M is for Metropolis
L is for Lois Lane
K is for Kal-El
J is for J'onn J'onzz
I is for Iron Man
H is for the Human Bullet
G is for Green Lantern
F is for the Flash
E is for Events
D is for Dr. Fate
C is for Captain America
B is for Batman
A is for The Avengers
Posted by Matt Adams at 8:00 AM