This is it. The final entry in my Superhero ABC's. It's been a long journey from the Avengers to X-Men...and for today's final explosive post, I give you the Y and Z to complete the superheroic alphabet.

Y is for Yellow. Y was the most difficult letter to pin down for this entire "event." My options were very limited, and I considered doing something like "Young Justice," "youthfulness," or "Ymir" (frost giant from the Thor universe).

I ended up settling on "yellow." Trust me, it's not because I'm in love with Coldplay.

In the early days of Green Lantern (the Hal Jordan version), we learned that the hero had a certain weakness: his power ring would not work on anything yellow. This was a supremely stupid and, it seemed, arbitrary weakness. Okay, that's exactly what it was. It was such a stupid idea, in fact, that years later yellow was changed through the alchemy-like magic of retroactive continuity as being symbolic for fear. Still stupid, yes, but not quite as stupid. Sort of.

For my Superhero ABC's, yellow is the perfect representation of something many heroes have: a weakness. Many of our heroes have an Achilles heel. For Superman, it's Kryptonite (he's also vulnerable to magic). Martian Manhunter has an aversion to fire. Aquaman can't stay on land for too long. Batman's single-minded focus on stopping criminals can work against him (as it did in the "Knightfall" storyline when all of Arkham's inmates escaped; the Batman of the Nolanverse is often bruised and battered...with the character stating that "Batman has no limits"). Familial and personal relationships can also become weaknesses (which is the reason many heroes have secret identities).

And now for the grand finale...

Z is for Zeitgeist. 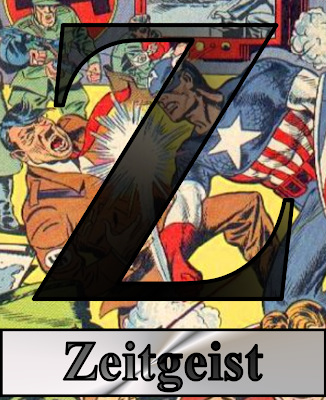 Superheroes and comic books capture the feel of an era. In the above picture, you see Captain America punching Hitler. Cap was a product of the rah-rah, "Go America!" era of World War II. He was consciously created to be a symbol of a greater, patriotic America.

The hero is a good illustration for this concept of zeitgeist. He began as pro-America propaganda, briefly became a Commie-smasher, abandoned his identity during the Watergate scandal (becoming Nomad, "man without a country"), confronted several prominent social and political themes in the 80s and 90s, and opposed the Superhuman Registration Act (itself a kind of stand in for a Patriot Act-era America).

Cap, of course, isn't the only hero to capture the essence of an era. Golden Age heroes harken back to a simpler, more black and white time. Silver Age heroes represent a goofier, more carefree era, while Bronze Age heroes tend to tackle darker subject matter and more complex sociopolitical themes. These are generalizations, of course, but they reflect the development of American society.

Z is for Zeitgeist
Y is for Yellow
X is for the X-Men
W is for Wolverine
V is for Villains
U is for Uniform
T is for The Tick
S is for Spider-Man
R is for Robin
Q is for The Question
P is for The Punisher
O is for Origin Story
N is for Nite Owl
M is for Metropolis
L is for Lois Lane
K is for Kal-El
J is for J'onn J'onzz
I is for Iron Man
H is for the Human Bullet
G is for Green Lantern
F is for the Flash
E is for Events
D is for Dr. Fate
C is for Captain America
B is for Batman
A is for The Avengers
Posted by Matt Adams at 8:00 AM