T is for The Tick. 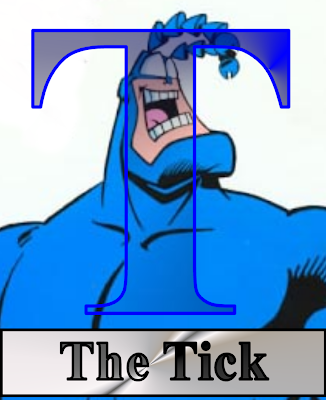 The Tick began as an underground sensation created by Ben Edlund for New England Comics. After growing in popularity, the "nigh invulnerable" hero hit TV as an animated series... and my life would never be the same. Seriously. I love The Tick. People who went to high school with me can attest to this fact. I quoted the TV show and watched deteriorating copies of the episodes taped on VHS. I made copies of these copies and gave them to a friend. I even wrote a version of "Twas the Night Before Christmas" featuring the Tick and his poor sidekick Arthur.

The Tick remains one of my favorite comic creations, a buffoonish caricature of superheroes and comic book conventions. He lives in the nondescript city called the...er...The City. His sidekick is a former accountant who dresses up as a moth (and often gets mistaken for a rabbit, much to his consternation). One hero, Die Fledermaus, is a Batman parody, complete with his own Die Fledermaus signal (results are decidedly mixed: "Everytime we flash the Die Fledermaus signal, he disconnects his phone and leaves town for a week.")

It was, I believe, a cartoon that was ahead of its time. Had The Tick launched at a time when the Cartoon Network, Comedy Central, and Fox's Animation Domination enjoyed widespread appeal, perhaps he would've enjoyed the kind of continued, mainstream success he deserved.

Tomorrow: Don't call it a costume.

S is for Spider-Man
R is for Robin
Q is for The Question
P is for The Punisher
O is for Origin Story
N is for Nite Owl
M is for Metropolis
L is for Lois Lane
K is for Kal-El
J is for J'onn J'onzz
I is for Iron Man
H is for the Human Bullet
G is for Green Lantern
F is for the Flash
E is for Events
D is for Dr. Fate
C is for Captain America
B is for Batman
A is for The Avengers
Posted by Matt Adams at 8:00 AM