Unlocking the mysteries of the Sega Tote

As I ramp up for the release of Sega CD Summer, I'll be writing about the Sega Genesis and the Sega CD in a series of blog posts.

The Sega Genesis played an outsized role in my childhood. I cut my video game teeth on the Mattel Intellivision. For much of my childhood, other kids didn't believe that system actually existed because almost everyone else had an Atari.

In the days before "playing Nintendo" was a thing, people "played Atari."

We sold the Intellivison during a garage sale one year, earning enough money to buy a Nintendo Entertainment System. So, yes, we eventually "played Nintendo." The NES was truly a great system, but when I was ready to upgrade in the early '90s, I chose the Sega Genesis instead of the Super Nintendo.

I sold the NES through a classified ad in the Palladiun-Item and used the money to buy a Genesis.

When it came time to upgrade to the Sony PlayStation, I kept the Genesis. I simply couldn't part with it. Heck, I even had the Sega CD and the Game Gear.

For years, the Sega Genesis Model 1 and Sega CD Model 2 and their various games have been stored away. They still work, according to intermittent tests from over the years!

I loved that system. I even liked the Sega CD a lot, even though I realize no one consistently tapped its great potential. I discovered the Sega CD was pretty unpopular when the games started getting big discounts just a year or so after I bought it (Future Matt wishes Past Matt would've grabbed that copy of Snatcher he saw in the bargain bin at Sears).

Today, the Sega Genesis and Sega CD sit in a blue tote with their various games. I have about thirty games between the two systems. In the weeks leading up to the release of the book, I'm going to reflect on the different games with mini-reviews.

Please join me as I unlock the mysteries of the Sega Tote: 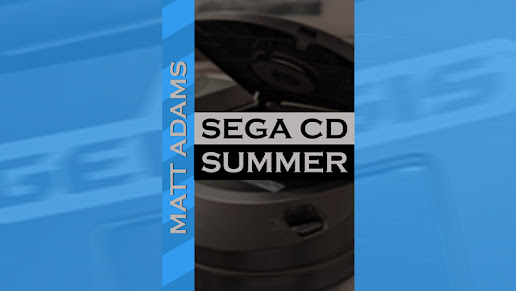 I've neglected the blog for a long time, which means I haven't given any updates on my writing exploits.

And I'm excited to share the news that I have a new novel coming out soon! I'm doing this one independently.

I hesitate to call Sega CD Summer semi-autobiographical, but the book is heavily influenced by my childhood in Williamsburg, Indiana. Some of the characters will definitely be easily recognizable to those who know me.

It combines several of my favorite things: video games, baseball, and small-town life. I started writing in December and went through several drafts. After receiving some feedback from beta readers, I decided it's ready to go.

I tried a few literary agents, but this is such a specialized book that I didn't think I'd be able to sell it. As a result, I decided to try something a little bit different.

As it turns out, I think there's a little serendipity at play here: this October marks the 30th anniversary of the release of the Sega CD in North America on October 15, 1992. In addition, Sega will release its latest mini console, the Sega Genesis Mini 2, on October 27, 2022.

In my view, that makes October the perfect time to send Sega CD Summer out into the world. Look for it on October 18, 2022. I'm aiming for a release on Amazon (both Kindle and print versions) as well as Smashwords (multiple electronic formats).

Summer 1994. The Great Console War rages between the Sega Genesis and the Super Nintendo.

Twelve-year-old Tommy Guggenbiller, desperate to buy the Sega CD, takes a job as a paperboy in the tiny town of Williamsburg, Indiana.

Juggling his newspaper responsibilities with summer baseball season, and his father’s obsession with America’s Pastime, Tommy must overcome deadbeat customers, an ex-best-friend-turned-baseball-rival, and the indomitable prankster known as Mr. James Glad.

Sega CD Summer is a celebration of ‘90s video games, small-town life, and baseball--a button-mashing tale in the spirit of 8-Bit Christmas and The Sandlot.