My Day with Edward

I came home from work today knowing my wife would go see "New Moon." Or make that "The Twilight Saga: New Moon" (you know, super-long titles are the rage these days!). And being a good and loving wife, she didn't want to leave me alone. So I came home to find an unusual house guest standing on my dresser.

That's right. On my dresser. 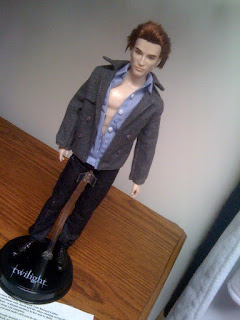 He came with a note saying basically that he was here to keep me company so I wouldn't be lonely. It's great. See, he doesn't talk. He doesn't play Xbox. But he says he's around to entertain me. So, what the hell do I do with this guy?

Well, I know a few things about Edward. He likes to play the piano. There's that whole "Bella's Lullaby" thing. So I thought, shoot, let's play Guitar Hero. That's musical. But Edward Cullen had a problem with that.

In a monotone, emotionless voice, his cold eyes boring into the depths of my soul, he informed me that Guitar Hero wouldn't work. He kept whining, something about the controller being too big for him. I thought that was preposterous; after "New Moon's" weekend gross, I didn't think anything could be too big for Edward Cullen. 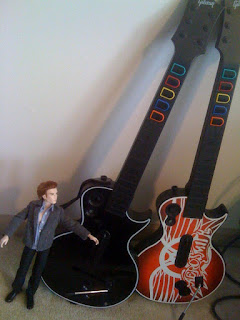 I forged a compromise. I told Eddie we should play some Xbox. The controller was a little unwieldy, and he really couldn't get the hang of Madden 10. I mean, it was 35-2 at the half and I'd intentionally run Peyton Manning into the endzone for the safety just to make him feel better. Halo 3 scared the piss out of him. He found Lego Star Wars confusing. 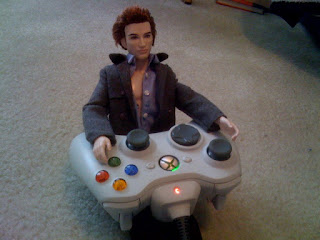 I thought about giving up.

Then, even though the bookshelf is like the equivalent of a three-story building for him, he saw a book of Tennyson writings and just HAD to look at it. So the idiot jumped...did you know vampires could jump REALLY FREAKING HIGH?...to the top of the bookshelf. I did him a favor and pulled the book down so he could read it. He was courteous enough not to mention the four unpublished manuscripts sitting atop the shelf. 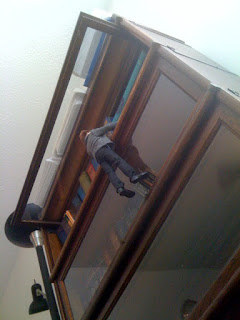 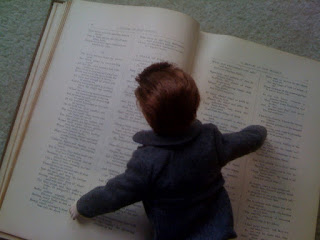 He started quoting passages and it was just kind of creepy. So I brought him a new book: The New Moon Official Illustrated companion. His curiosity was piqued; he said he was done with Tennyson for a while. So he began looking through the book, staring emotionlessly at pictures of him and Bella. Again, creepy. He did have one outburst, nearly ripping a page that showed Jacob and Bella together. He muttered something about "washboard abs" and "were-puppies," but due to the lack of inflection in his undead voice, I couldn't really understand what was going on.

I left the room for just a minute and heard heavy breathing and a "shushing" sound. When I returned, 12" Hall of Fame Stalker had put a knife to Eddie's throat.

As I began warning Stalker of the futility of his covert action, Eddie bounced back with lightning-like speed and precision, kicking Stalker in the groin. The Joe went down after the super-powered blow, but Eddie felt badly about using his powers like that. So he offered his hand to help Stalker up.

Out of nowhere, Snake-Eyes appeared, sword at the ready to defend his comrade. But his ninja stealth was no match for Eddie's ridiculous vampire reflexes.

I think Mr. Cullen would've ripped him to shreds; Stalker and Duke even began cheering him on. 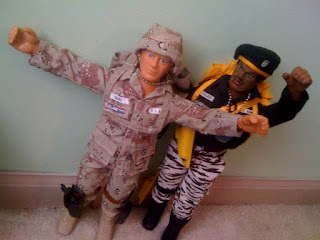 No, I don't know when Duke showed up. Anyway, as a peace offering, Duke let Eddie try on his helmet, which Eddie wore like a dandy. That's high fashion for ya. 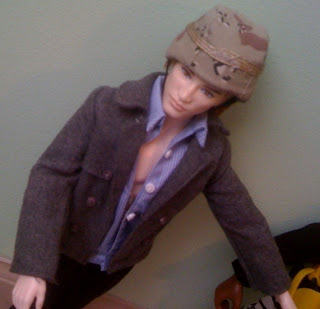 Somewhere along the line, Duke texted Cobra Commander (I guess they've rekindled that ruined friendship from the movie?), who showed up and let Eddie try on his famous hood. It was completely absurd. 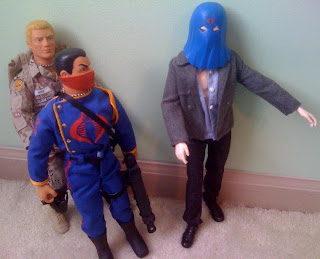 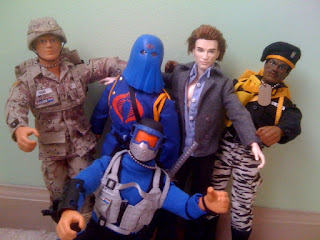 The Joes left, but I had to pick up the mess that remained. While working on that, I heard a sound from the kitchen. Idiotic Edward had opened the fridge and gone straight for the ketchup. I had to explain to him that it was NOT blood. What a moron. Who's heard of Heinz blood anyway? Sure, the guy can read Tennyson. But product labels? Waaaaaay beyond his comprehension. 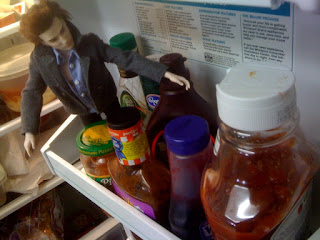 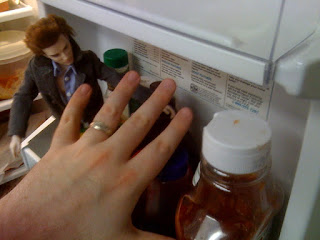 From there, he jumped onto a bookshelf and started petting the nice zebra that lives there. I snapped a pic of that cute moment, which turned ugly when Eddie tried to drain the blood right out of the noble creature. 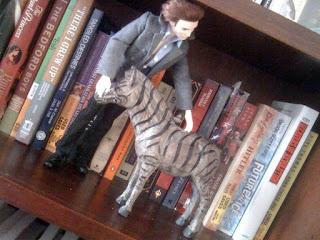 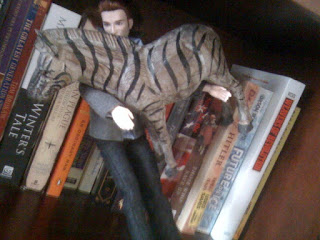 Not long after that, he got into the Goldfish. Thankfully, we're talking about snack crackers and not actual goldfish. Using his mind-reading abilities to decipher that I was somewhat upset at him, he plucked one out and presented it as a peace offering. 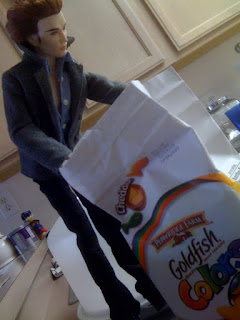 As the afternoon wore on, I decided maybe we'd watch a movie. Edward made his selection. As you can imagine, it was completely self-serving. 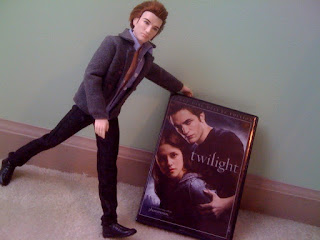 I made my own selection and showed it to him, but he thought "The Rock" would be too scary. 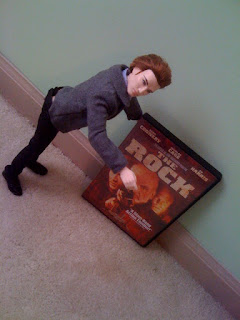 "The Rock," too scary? The dude's a vampire! 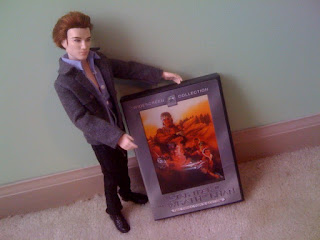 It's at this point that every tween and twihard has to become extremely jealous of me.

I was in bed with Edward Cullen! Team Edward? Oh, yeah! So if you've been wondering what Edward was up to in "New Moon" between his Obi-Wan-esque apparitions, you now know the answer. He was in MY BED watching "Star Trek II: The Wrath of Khan." For whatever reason, he kept re-watching the part where Kirk yells "KHAAAAAAAAAAAAN!" 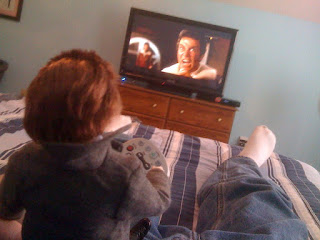 I started to think, maybe I can get along with this guy after all.

But then he did something unforgivable, baring his ridiculously thin yet ripped and sparkling torso and reaching out for me while singing "You Are Not Alone" by Michael Jackson. 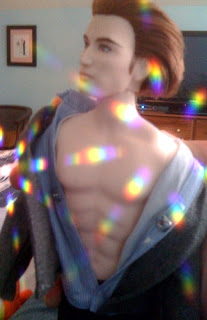 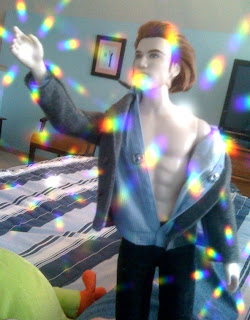 At that point, I should've killed him with fire. But it's not quite that simple with vampires...
Posted by Matt Adams at 1:34 PM 1 comment: