S is for Spider-Man. 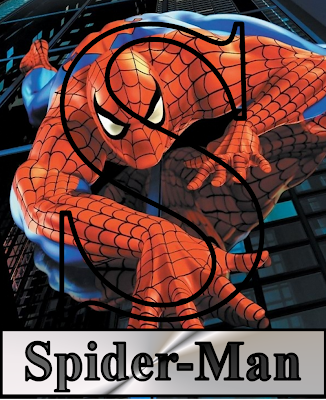 Spidey is one of the A-listers in the world of comics. His Uncle Ben gave us the famous phrase, "With great power comes great responsibility," a theme that's played over and over in comics.

His origin is equally famous: Nerdy Peter Parker is bitten by a radioactive spider and gifted with extraordinary abilities. He has incredible agility, sticks to walls, and senses danger with his "Spidey sense." When Peter tries to make some cash on the side as a wrestler, he gets stiffed on money from the promoter. When the other man is robbed, Peter lets the thief walk away. The robber, in a bitter twist of fate, ends up killing Peter's Uncle Ben.

Paralyzed with guilt, Peter dedicates his life to living up to Uncle Ben's words, "With great power comes great responsibility." He didn't listen the first time, unfortunately, but he rises determined to right that wrong.

We've seen Spider-Man's face on practically every kind of product. He's given us two fantastic movies (and a supremely lackluster third film that gets thrown into the Vault of Movies that Never Happened). The 90s cartoon version remains one of my favorites (and it's streaming on Netflix!).

As an added bonus, I present to you a gift, this new Amazing Spider-Man trailer. If you can get past Andrew Garfield's hair, it's not too bad.

R is for Robin
Q is for The Question
P is for The Punisher
O is for Origin Story
N is for Nite Owl
M is for Metropolis
L is for Lois Lane
K is for Kal-El
J is for J'onn J'onzz
I is for Iron Man
H is for the Human Bullet
G is for Green Lantern
F is for the Flash
E is for Events
D is for Dr. Fate
C is for Captain America
B is for Batman
A is for The Avengers
Posted by Matt Adams at 8:00 AM