U is for Uniform. 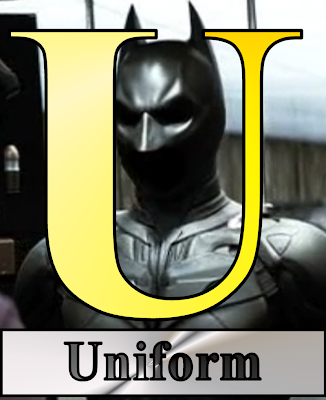 Whatever you want to call it, don't call it a costume. The hero of my upcoming superhero novel I, Crimsonstreak is fairly adamant about this. To him, fighting crime is a birthright. It's a job. That means superheroism is something that must be taken seriously (or, at the very least, semi-seriously). Heroes don't wear costumes because "costumes" are for trick or treating.

Of course, Crimsonstreak sometimes takes himself a bit too seriously (and mostly on this point about costumes...er...uniforms). Still, every superhero has one. Some have simple masks, others ornate cowls. Some have capes, others (ahem...especially for female avengers) barely cover anything. Spandex is often employed, usually in bright colors. Others have strange pouches and contours. Many have some sort of symbol.

I think it's safe to say you're not really a comic book hero (or villain, I suppose) unless you wear some of goofy-looking uniform.

I wouldn't have it any other way.

Tomorrow: Because a hero needs someone to play with.

T is for The Tick
S is for Spider-Man
R is for Robin
Q is for The Question
P is for The Punisher
O is for Origin Story
N is for Nite Owl
M is for Metropolis
L is for Lois Lane
K is for Kal-El
J is for J'onn J'onzz
I is for Iron Man
H is for the Human Bullet
G is for Green Lantern
F is for the Flash
E is for Events
D is for Dr. Fate
C is for Captain America
B is for Batman
A is for The Avengers
Posted by Matt Adams at 8:00 AM