M is for Metropolis. 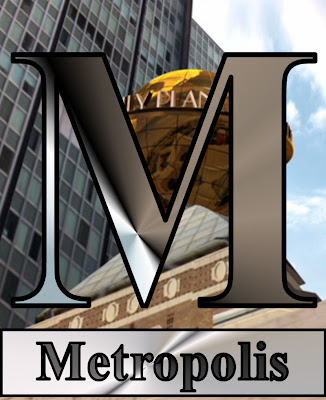 Metropolis wraps up a completely unintentional "mini-streak" of Superman entries.

I don't really know much about the city itself other than it's the home of Superman and the Daily Planet. It's on this list to talk about one of the essential elements of superherodom.

Superman has Metropolis. Batman has Gotham City. Spider-Man has New York (So does Daredevil. And the Punisher. And the Fantastic Four. And Iron Man...). Green Lantern has Coast City. The Flash has Keystone City (or Central City, if you're talking about Barry Allen). The Tick has The City.

Superheroes often exist in heavily urban areas. This makes sense for a multitude of reasons. A lot happens in cities. Important media markets are in larger cities. Large cities have large populations, lots of real estate to protect, and high crime rates. It works. I get it, you get it. If a superhero patrolled the streets of my small Midwestern hometown, he or she wouldn't have much to do. Many Midwestern cities lack the "draw" of bigger cities for heroes. Heck, Superman left Smallville to go to Metropolis.

In many cases, cities become synonymous with different heroes. Gotham, for example, is a decaying, crumbling analogue for New York. Like Batman, it is dark and foreboding; twisted and complex. Metropolis is a "cleaner" vision of the city, a shining jewel that seems more hopeful, like the character of Superman himself. Of course, in world of The Tick, The City is simply a fairly nondescript location full of generic buildings and businesses. Considering there's not much going on upstairs for Big Blue, that fits just about right.

Tomorrow: There are two of him. Both are washed up heroes, but one is still young enough to try to save the day.

L is for Lois Lane
K is for Kal-El
J is for J'onn J'onzz
I is for Iron Man
H is for the Human Bullet
G is for Green Lantern
F is for the Flash
E is for Events
D is for Dr. Fate
C is for Captain America
B is for Batman
A is for The Avengers
Posted by Matt Adams at 8:00 AM