N is for Nite Owl. 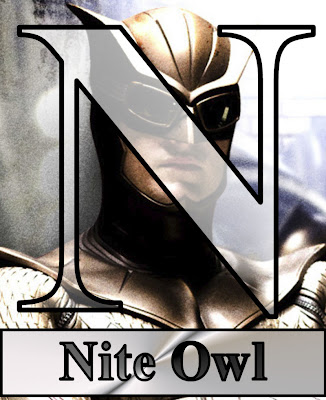 Watchmen is a seminal work in the world of superheroes, a deconstruction of character archetypes and a psychological examination of what causes a person to put on a mask and dispense justice. Perhaps the graphic novel is held up to a ridiculous standard of prestige, but there is no doubting its influential role in comics since its launch in 1986.

Nite Owl is a main character in the story, and he is a "legacy" hero. The first Nite Owl was part of a group called the Minutemen. He eventually revealed his identity as Hollis Mason and wrote an autobiography. Inspired by Mason, a man named Dan Dreiberg took up the mantle, becoming the second Nite Owl. Whereas Nite Owl I was a brawler, Dreiberg's Nite Owl II was a gadgets guy; a kind of amalgamation of Batman and the Blue Beetle. His idealism (especially in his younger days) is also reminiscent of Superman; his gawky/nerdy non-hero persona smacks of Clark Kent.

In the comic, Dreiberg manages to keep his identity secret in the wake of the Keene Act that outlawed masked heroes. Nite Owl is a reluctant associate of Rorschach (the two once worked together) and carries a flame for Silk Spectre II. The three heroes eventually unite to stop a mutual friend who is now the world's Big Bad.

Monday: Every hero has this story to tell.

M is for Metropolis
L is for Lois Lane
K is for Kal-El
J is for J'onn J'onzz
I is for Iron Man
H is for the Human Bullet
G is for Green Lantern
F is for the Flash
E is for Events
D is for Dr. Fate
C is for Captain America
B is for Batman
A is for The Avengers
Posted by Matt Adams at 8:00 AM