If there's anything that excites me about I, Crimsonstreak, it's that people will get to meet the esteemed Mortimer P. Willoughby, manservant for the Kensington family and aide-de-camp for the Crusading Comet. He is my absolute favorite character to write. Mortimer (or as Crimsonstreak calls him, "Morty") is a British butler, Alfred to the Crusading Comet's Batman, although Mortimer is sometimes a bit less...helpful.

He also happens to be an accomplished smart aleck. Morty and Crimsonstreak have an adversarial relationship that isn't explained in the book. It doesn't need to be; they just have a Jerry Seinfeld/Newman ("Hello, Newman"/"Hello, Jerry") rivalry.

After delving deep into the archives of the Crimsonstreak universe, we unearthed a copy of Mortimer P. Willoughby's Guide to Superhero Etiquette (12th Edition). If you order early, you'll be able to read the butler's important advice on how "proper" superheroes are supposed to act. We live in a civilized society, people! 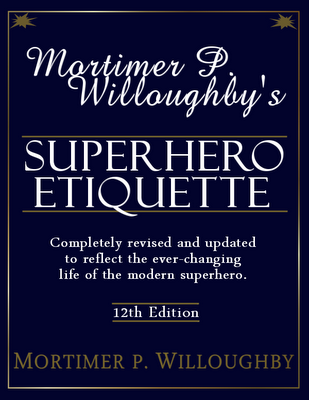 On changing into a superhero uniform in public:

On gentlemen and spandex:


Gentlemen should wear suitable fabrics that accentuate their musculature...Particular attention must be paid to the area just below the waist. It is here that “too tight” can become an embarrassment for certain heroes.

On women and uniforms:


An understated elegance is suggested, but forethought should be given to utility and public perception...Showing too much leg or plunges of décolleté has little to do with saving the world.

On the Supervillain monologue:


In cases in which you have foiled the villain’s nefarious plot and the safety of the world is assured, etiquette calls for you to listen to the Supervillain Monologue for at least one minute. After allowing the villain to feel that he or she has won the day, you may then apprehend them or initiate Final Fight protocols.

On receiving an invitation to another hero's secret lair:

Sporting events, family reunions, social gatherings, and other minutiae are not acceptable excuses.


If the President speaks directly to you, address him or her as “Mr. President” or “Madame President.” In prolonged conversation, you may alternate “Mr./Madame President” and “Sir/Madame.” Do not shake the President’s hand unless he or she offers it first. Please be mindful of sharp gauntlets and secret weapon switches.

On the ever-important super-secret drop box:


Many heroes do not have their own home address and sending an invitation to their secret identity (if known) could inadvertently reveal that identity to others. Thus, it is recommended that heroes keep a special “drop box” in their city for emergency correspondence and dinner invitations.

On receiving help from other heroes and the police:


It is common courtesy to send a prompt thank-you note to police and other superheroes for their assistance. Fruit baskets are the standard gift of gratitude.

On utilizing superpowers and gadgets:


It is imperative that you use your powers wisely. Be especially mindful of nearby civilians, low-hanging and unsteady structures, and historic buildings.


During most interviews, you should look at the reporter who is asking the question and not directly into the camera. However, if you need to speak directly to the viewing audience (“That, children, is why you should never play with matches”), looking into the camera is perfectly acceptable.

On making invitations to a superhero formal dinner:


Superheroes are encouraged to print their invitations on cardstock matching their superhero colors. Cream or white cardstock is still perfectly acceptable.

You can get Mortimer P. Willoughby's Guide to Superhero Etiquette (12th Edition) by pre-ordering I, Crimsonstreak here.
Posted by Matt Adams at 5:10 PM