Writing Tools of the Trade

The Notebook: When I write, it's usually on my computer, although sometimes I scribble in a notebook. That's for the actual writing of a project, however. Conceptualization and outlines always start in a notebook. I have different ones depending on my mood. There's a notebook from high school with some ideas in it that I still kick around. A newer notebook includes more recent ideas for both novels and short stories along with blogging and promotion ideas. 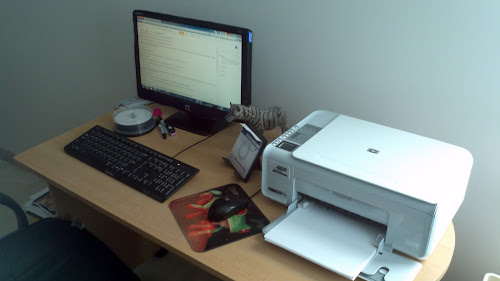 The Computer: I've been a PC fan for a long time, and my computer is as barebones as they come, a dual-core Compaq Presario with Windows 7. I write using Microsoft Word, although one of these days I'm very tempted to try out Scrivener. Word gets the job done; it's not flashy, but it's pretty standard and it has a familiar feel. Oddly, working with Word gets me into my "writing mindspace." 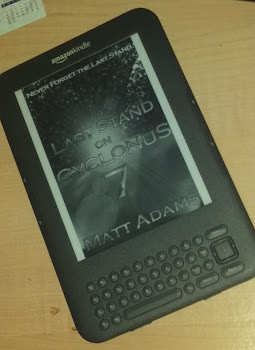 The Kindle: This wasn't a part of my repertoire until last summer, but the Kindle has become an absolutely essential tool in my writing utility belt. I don't mind sitting in front of the computer to write; I, however, loathe sitting in front of the computer to read. Hate it, absolutely hate it. The Kindle bridges the gap; I can email documents to the Kindle and read through manuscripts outside or while lying on the couch. I use the Kindle keyboard, which is handy for making notes about misspellings, wrong words, character inconsistencies, and other things I spot during a read-through.

The Caffeine: I am not a coffee drinker. I've never liked the taste and I've never worked a typical day job shift that made it part of my daily routine. When I need a jolt, I rely, sadly, on soda. I don't really care what kind I drink. I tend to be more of a cola/cherry cola guy (I lean toward Coke), although I also like Dr Pepper. Mountain Dew and its various derivatives are fairly low on the list.
Posted by Matt Adams at 9:00 AM

Email ThisBlogThis!Share to TwitterShare to FacebookShare to Pinterest
Labels: catch the excitement, matt adams author, the writing process, tools of the trade