Well Your Highness, I guess this is it.

We've made it to the Letter Z! 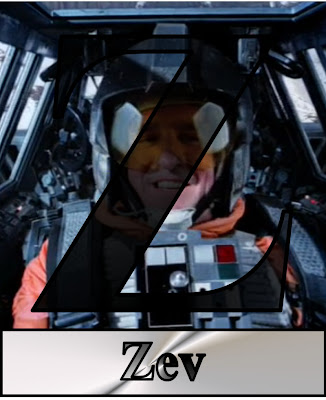 I don't think Zev Senesca's name is ever mentioned in The Empire Strikes Back, but if it weren't for him, it's entirely possible Luke would've never made it to Dagobah and Han Solo would've never found himself frozen in carbonite.

After Han mounted a tautaun and headed out to find Luke in Hoth's harsh conditions, the Rebels organized a search for their lost friends. Several snowspeeders covered different regions of the ice planet looking for Captain Solo and young Skywalker, but Zev is the man who found them:

HAN: Good morning. Nice of you guys to drop by.

Of course, we didn't get to celebrate Zev's discovery for very long. After Luke took a dip in a Bacta tank, Imperial Walkers landed on Hoth. Zev climbed into his snowspeeder once more...and it ended up being his last mission. An AT-AT walker cut down the man who found the lost heroes.

That brings us to the end of Matt's Star Wars ABC's.

Coming soon at an undetermined point in your future!
Y is for Yoda
X is for X-Wing
W is for Wedge
V is for Vader
U is for Ugnaught
T is for Tatooine
S is for Star Destroyer
R is for Rancor
Q is for Qui-Gon Jinn
P is for Probe Droid
O is for Owen
N is for Needa
M is for Mon Mothma
L is for Lightsaber
K is for Kenobi
J is for Jabba
I is for "I know"
H is for Hoth
G is for Galactic Empire
F is for Falcon
E is for Emperor
D is for Death Star
C is for Chewie
B is for Bespin
A is for Ackbar
Posted by Matt Adams at 1:00 AM