We've almost reach the end of this week's Star Wars ABC's series, but we have a very important one today.

V is for Vader! 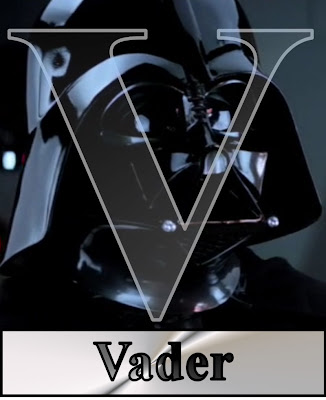 There are nightmares, bogeymen, and other unpleasantries.

And then there's Darth Vader.

Encased in a life-giving suit, he's more machine now than man, twisted and evil. At least, that's what his friends say. He doesn't appreciate a good joke and is incapable of playing nice with others. Vader is as Vader does...and Vader does as his Emperor commands.

When I was a very, very young child, Vader scared me. While sleeping in my room at night, I thought I saw his shadow standing in the corner and imagined his synthesized breaths. If I got out of bed, he'd switch on his lightsaber and hack me to pieces.

Good news: I fear him no more.

Part of it's growing up; part of it's knowing that Hayden Freaking Christensen is inside that suit with his pedantic whining and monotone delivery ("One day, I will be the most powerful Jedi EVER!").

Okay, it's mostly growing up; I just wanted to take a stab at the Greatest Canadian Actor Ever.

Without Vader, there is no Star Wars.

U is for Ugnaught
T is for Tatooine
S is for Star Destroyer
R is for Rancor
Q is for Qui-Gon Jinn
P is for Probe Droid
O is for Owen
N is for Needa
M is for Mon Mothma
L is for Lightsaber
K is for Kenobi
J is for Jabba
I is for "I know"
H is for Hoth
G is for Galactic Empire
F is for Falcon
E is for Emperor
D is for Death Star
C is for Chewie
B is for Bespin
A is for Ackbar
Posted by Matt Adams at 8:00 AM