For Friday, we concentrate on the letter "W."

W is for Wedge. 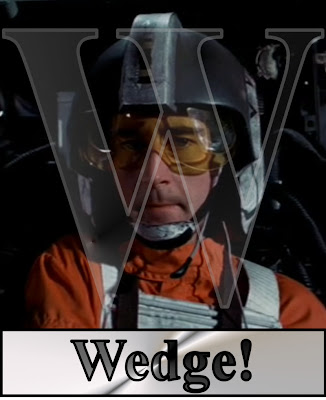 Not every hero has to brandish a lightsaber.

Not every pilot has to have the Force to do his job well.

Wedge is your old, reliable buddy. The responsible one who's always there as the designated driver. Even when things go south, it doesn't shake him. You envy him for that.

A "minor" character who appeared in the original trilogy, Wedge served with valor at the battles of Yavin, Hoth, and Endor. He played a major role in the assault on the first Dreaded Death Star and had an actual hand (er...proton torpedo) in the destruction of the second one.

A skilled pilot, he could probably best Luke Skywalker if Luke turned off his Force powers for a few minutes.

I love Wedge, who always came off as a cool guy to hang around with. Thank the Force for giving him these quotes:

"Look at the size of that thing!"

V is for Vader
U is for Ugnaught
T is for Tatooine
S is for Star Destroyer
R is for Rancor
Q is for Qui-Gon Jinn
P is for Probe Droid
O is for Owen
N is for Needa
M is for Mon Mothma
L is for Lightsaber
K is for Kenobi
J is for Jabba
I is for "I know"
H is for Hoth
G is for Galactic Empire
F is for Falcon
E is for Emperor
D is for Death Star
C is for Chewie
B is for Bespin
A is for Ackbar
Posted by Matt Adams at 8:00 AM