We're not finished yet! My Star Wars ABC's kicks off another week...just eight more letters left in the alphabet!

S is for Star Destroyer. 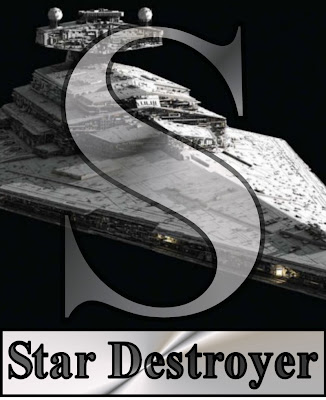 I've always been a fan of the wedge shape, which is undoubtedly intimidating. They are the backbone of the Imperial fleet, huge ships carrying more than 47,000 personnel and a complement of 48 TIE fighters plus TIE variants, shuttles, gunboats, and AT-AT Walkers.

When a Star Destroyer parks itself outside your planet, you'd better hope your energy shield can hold. Then you'd better hope your defenses can stop the AT-AT and AT-ST walkers from destroying your energy source. If those fail, you'd better have a shuttle on standby for a quick escape, because the orbital bombardment is going to be brutal. You see, the Empire doesn't care about things like "collateral damage," and it sure as hell isn't interested in a "surgical strike" (at least, not in most circumstances).

And no one--no one--can forget how huge the Star Destroyer looked when it roared across the screen at the beginning of Star Wars.

TOMORROW: "If there's a bright center to the universe, you're on the planet that it's farthest from." You know, if that's true...why does so much happen there?

R is for Rancor
Q is for Qui-Gon Jinn
P is for Probe Droid
O is for Owen
N is for Needa
M is for Mon Mothma
L is for Lightsaber
K is for Kenobi
J is for Jabba
I is for "I know"
H is for Hoth
G is for Galactic Empire
F is for Falcon
E is for Emperor
D is for Death Star
C is for Chewie
B is for Bespin
A is for Ackbar
Posted by Matt Adams at 8:00 AM