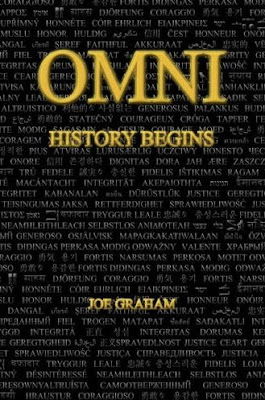 All right...I've been talking about this for a while. It's time for the blog's first-ever book review.

This all started a few weeks ago when a man approached me about his book OMNI: History Begins, which is available at several major outlets, including Amazon.com and Barnesandnoble.com. I decided to go for it. We haven't done any book reviews on this blog, but since the focus has become geared more toward writing, I figured it would be something unique.

Joe Graham's OMNI: History Begins tells the story of an 11-year-old boy named Joseph Pringle. He's a near-miss, which means he possesses abilities beyond the scope of normal people that fall just short of superheroic. After a particularly frightening experience at his school science fair, Joseph and his family become the focus of an investigation by the Heroes Union.

They're tested, scrutinized, poked, and prodded. The results prove surprising; not only are Joseph's powers growing at an exponential rate, but he could be a danger to humanity! He receives an unexpected invitation to Alpha, an academy where kids with special abilities train as future superheroes. Think Hogwarts...take away the wands...and replace them with spandex.

Quickly, Joseph takes the superhero "handle" Midas and falls in with a core group of friends with an international flavor: Darkspeed, Olympian, Bioforce, Virtuoso, and Shi. Despite Joseph's young age--he's only 11 years old while the others at the academy are 12 and up--his abilities continue to grow and he makes 1st Team, which is essentially the varsity superhero squad.

The kids train, they fight among each other, struggle with a lack of direction from their "tough-love" Coach Connors, and act as typical pre-teens and early teenagers should act. They form rivalries with other teams and take their lumps when they refuse to work together.

The good news: they get their act together.

The bad news: a long-thought-dead menace rises from the grave to threaten the world with unprecedented destruction and chaos.

Will the young heroes be up to the challenge?

What I Liked: I'm a sucker for superhero stories. I was instantly interested in the subject matter and really did enjoy meeting the characters and spending some time in the world. The novel is quite lengthy--600 pages--and I witnessed Joseph & company change and grow throughout the book (along with their powers). Joseph in particular discovers an incredible truth about his abilities, uncovering an unexpected destiny he isn't prepared for.

The book draws upon several of my favorite conventions, including future-science, some light time travel, and an "I am your father" moment (the funny part about the latter: it doesn't involve the main character!). Graham has created a fun world lovingly filled with things like "nanomail armor," "Sparrow transports," and "transmutation."

The story features an international cast of characters who travel across the globe as they train, grow into their powers, and face a looming global threat.

On Second Thought: OMNI has some glaring problems, most of them in technical execution. I spotted several grammatical errors and problems with writing mechanics. While reading the book, I kept a notepad to write down any misspelling, incorrect wording, or faulty punctuation I spotted along the way. I gently put the notepad aside as the mistakes piled up. This is a self pubbed/small press book, but the quality was, unfortunately, not up to professional standards. Several problems became apparent, from confusion between words (they're vs. there) to missing punctuation, misspelled words, and even incorrect words. I found the mistakes distracting enough to pull me out of the story.

I also struggled to keep up with the sheer number of characters introduced during the first 130 or so pages. There are simply too many thrown at the reader at one time; many of these characters are sparsely used and could have been eliminated entirely or introduced in a different manner.

The Verdict: OMNI: History Begins aspires to be a mash-up of Ender's Game, the Harry Potter series, and classic superhero comics. It succeeds in some respects, but falls short in other areas. Readers who are able to overlook the book's technical shortcomings will find an enjoyable story...and wish the finished product had several more coats of polish.

I was provided with a complimentary copy for the express purpose of this review.

What influenced you to write OMNI?

Joe: I always wanted to write something my kids would like to read. OMNI started out as a few bedtime stories. Then I simply wanted to write it down so they would have something from me to read. It just started snowballing from there into a story much bigger than I thought it would ever be.

I work as a computer scientist and have seven children. When I started writing OHB, I had six. Their names are Jacob (Jake), Johanna, Joseph, Jillianne, Juliette (Jet), and John. They are the basis for the personalities you see in 1st team, which is the reason you have multiple protagonists in the story, each is a special part. I just happen to use Joseph’s character to pave the introduction into the story. Also, Jake is the one who did the cover art and the green and black comet on the back of the book is the Darkspeed symbol.

What other books and authors do you count as influences?

Joe: I met a comic book writer at ComiCon back in 92. He gave a workshop on storytelling. I remember it vividly to this day (because) he really brought his craft to life and sparked something inside of me that made me what to be a storyteller of any medium. I left his name off, because years later when I tried to contact him and tell him what an influence he was on my life, he was a colossal jerk. Oh well, I’ll just remember the good part.

Other than that, (I would say) Orson Scott Card because he also put out a book on writing sci-fi. I read that book and saw how his rules for writing worked in his own worlds. That meant something to me; to read how he thought as he wrote.

How long did it take to write the first draft?

Joe: I have a full-time job and a big family, so in my "spare" time it took about a year. That breaks down like this:

1) Three months to write a 75-page outline and invent the new world and its science and jargon.

2) Six months to actually write the rough text. When I write, I write ten pages in three hours. I don’t look back. I don’t check spelling. I don’t let anything derail me from making forward progress. It’s kind of like free writing.

3) Three months to check the book for plot content. I looked for any holes in the plot that might come back to haunt me.

What has been the biggest struggle in promoting the book?

Joe: I’m not really a promotions guy, so it’s been a complete amateur effort on my part. I think I’m kind of like Edison who said, “I have not failed 1,000 times. I have successfully discovered 1,000 ways to NOT make a light bulb.” Only catch is, I don’t think I’m up to 1,000 yet!

What can you tell readers about your plans for the sequel? Is it bigger? Better? Grander?

Joe: All of those things :)

CWII (Coalition's War II) is about one-third written. It starts up two days after the last one ended. One of the things I started doing in this book is giving Vector (the main bad guy who appears relatively briefly in book one) as much time in development as the rest of the main characters.

In OHB, I had to teach the reader my universe, which I did through Midas/Cosmos, as he learned it. In CWII, I don’t do that. I pick up where I left off and assume (the reader knows) all that. The second book moves faster because of this.

More secrets are revealed as the story goes on, showing the strengths and the weaknesses of the main characters. The Coalition becomes a greater threat as the heroes prepare for the next round.

What are your writing ambitions? Are you working on anything else?

Joe: I’ve written a few movie scripts, one really good one. But, I think that working the OMNI series is the thing that interests me most. I’ve sat down and written the end of the series, which happens several books later. It’s nice to have a clear vision of where you started and where you will end. This series is my labor of love.

Tell me a little about Rejection Press? What’s the idea behind it? What’s next?

Joe: When I finished my first draft, I started emailing publishers and agents, ignorant of the whole publishing process. I was fortunate if anyone even responded with a rejection. Most of the time, it was no response at all.

I had the chance to meet a lady on the internet who had just published a book on horse breeding. Being an expert in her field and working to polish her query letter and approach, she sent out over 200 letters over a two-year period before an agent agreed to read her book.

I’m too impatient for that, so Rejection Press was born. I started a small press and my work is available online.

Don’t get me wrong, I would love to hook up with a big publisher. To date, no one in the mainstream publishing industry has read my work.

As for the future, expect more of the OMNI series and more of the same storytelling.
Posted by Matt Adams at 1:27 AM