A Journey through "In Memoriam"

I called my wife as I started the 25-minute journey from home today and she informed me that I had a package waiting for me. I wasn't expecting anything--after all, I haven't ordered anything online since Christmas--but I finally put it together: my contributor's copy of A Thousand Faces had arrived! 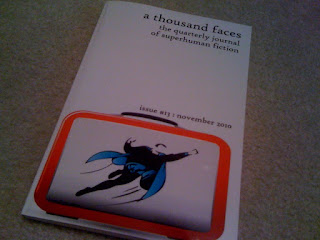 The pristine cover of this fine publication.
I wrote "In Memoriam" nearly a year ago and learned it had been accepted for publication in May. The actual issue appeared in November. I have a special attachment to the story; it was the very first story I ever submitted and the first accepted for publication, although it was not the first one I ever had published (that distinction belongs to "The Bank Loan," which appeared in an issue of This Mutant Life) 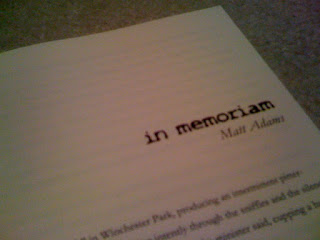 A familiar author penned this story.
As I flipped through the book eager to again read the fine stories contained within, I spotted something on the last page that made me smile. A Thousand Faces accepted another work of mine...which was actually promoted! 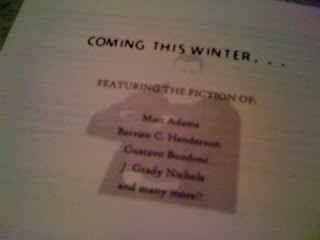 It's blurry...but if you squint really hard, you can see that certain familiar author's work promoted for the next issue!
A Thousand Faces publishes quarterly. My next story, "The Villain," will appear in the March 2011 issue, which is coming soon! Make sure to check out A Thousand Faces for updates! Of course, when it's up, you'll hear about it here!
Posted by Matt Adams at 12:39 AM