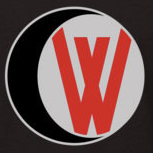 Dissatisfied with the current state of the world, Colonel Chaos decided to remake it in his image. His solution: the New World Common Wealth, a one-world government run by Chaos and his seemingly endless supply of Enforcers. Declaring himself High Imperator, Chaos stripped away the individual identities of states and entire countries, dividing the world into NWCW Regions.

A totalitarian government, the NWCW demands complete obedience from its citizens. Chaos is obsessed with total control of every facet of life, from the internet and travel to commerce and the media. As his Enforcers fight off an underground resistance from the remaining superheroes, Chaos and his minions ramp up a propaganda campaign urging citizens to "report unregistered supers."

Perhaps more alarming is the NWCW's rallying cry: "Enemies of the Common Wealth must die!"

BACK TO CRIMSONSTREAK CENTRAL!
Posted by Matt Adams at 8:00 AM