I is for Iron Man. 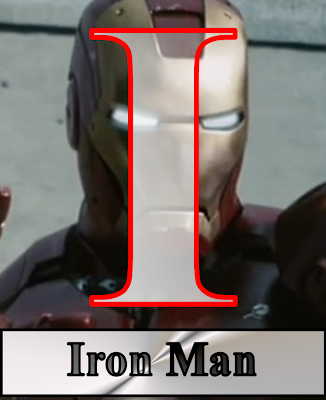 The ol' Shellhead is a Marvel Comics staple: a member of the Avengers, a talented scientist, a womanizer, and a drunk. I've always liked Iron Man, but the character didn't get the attention he truly deserved until the 2008 movie starring Robert Downey Jr. as a pitch-perfect Tony Stark/Iron Man. The sequel was a convoluted mess, but Downey is so good in that role!

Stark is a billionaire playboy and heir to his father's company, Stark Industries. His origin story has been tweaked over the years, but basically Stark gets injured and captured during a battle. As shrapnel races toward his heart, another captured scientist named Yinsen builds an electromagnet that keeps the shrapnel from piercing Stark's heart. Eventually the two men assemble a crude battle suit that allows Stark to escape.

Upon returning to civilization, Stark wages a war on those who would misuse his company's weapons. He fights against arch-enemies like the Mandarin, Titanium Man, and the Crimson Dynamo.

One thing I've always liked about Iron Man is his Hall of Armor, a vast collection of specialized armors designed for any conceivable situation. Iron Man's alternate suits include armors fit for duty in extreme environments like the arctic, underwater, and space. He also keeps a set of Hulkbuster armor around just in case he needs to, you know, fight the Hulk.

Monday: A survivor who's afraid of fire.

H is for the Human Bullet
G is for Green Lantern
F is for the Flash
E is for Events
D is for Dr. Fate
C is for Captain America
B is for Batman
A is for The Avengers
By Matt Adams at January 27, 2012