D is for Doctor Fate. 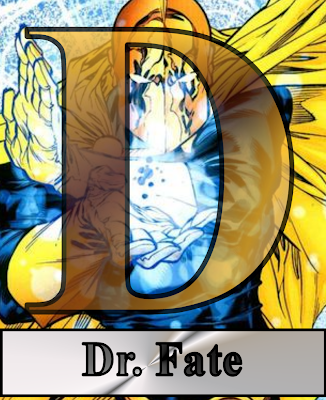 Fact is, they're both more recognizable to non-comics fans than Dr. Fate. After all, Ben Affleck played Daredevil in a movie that did relatively well at the box office. Darkwing Duck had his own cartoon.

I picked Dr. Fate for a very specific reason. He represents heroes who weren't doused by gamma rays or bitten by a radioactive spider. He's no tech expert in a suit or armor; no scientifically-enhanced super soldier.

Dr. Fate represents a different side of the superhero continuum, and an important one at that. He embodies the magical, mystical side of comic books. The character's history is convoluted, but if you boil it down to its most basic parts, the Helm of Nabu endows the wearer with magical powers. This comes at a cost, of course, as Dr. Fate is a kind of amalgamation of the personalities of both the wearer and the source of the helmet's power, an ancient wizard named Nabu.

Dr. Fate is a powerful character, and my experience with him is mostly tied to his appearances in the Justice League cartoon series. I think he also made an appearance on Batman: Brave and the Bold as well. I found Dr. Fate to be an interesting character, and thought he had an interesting (if, as mentioned earlier, convoluted) history.

For the purposes of my Superhero ABC's, Dr. Fate stands in for those heroes who use magic. There are others who could've stood in. Captain Marvel, while very Superman-like, is also a magical character in many ways. You've got the magicians Zatara and Zatana. And then you've got Doctor Strange, Marvel's Sorcerer Supreme. To be honest, I almost went with Dr. Strange for this one, but I just like Dr. Fate a little bit more.

It was a close call, actually. A character in my novel, the Amazing Merrick, represents the magic wielders in I, Crimsonstreak. He's probably closer to Zatara than Fate or Strange. But Dr. Strange's Sanctum Sanctorum directly influenced the Batcave-like lair of another hero, the Crusading Comet. So when you step into the Sanctum Cometus, you'll know where the idea came from.

Monday: You can't sell a few comics without breaking Batman's back. Or killing Superman. Or pitting Iron Man against Captain America...

C is for Captain America
B is for Batman
A is for The Avengers
Posted by Matt Adams at 8:00 AM