Ode to a Writing Chair 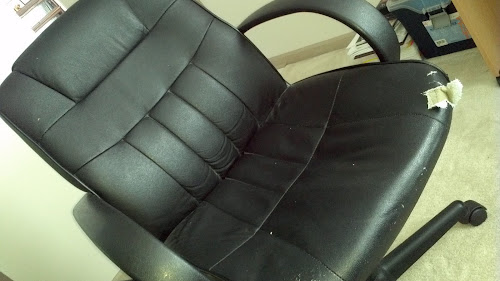 In 2004, after moving into a new apartment, my brother and I worked together to assemble an office chair. By "work together," I mean we fought and argued and threatened to throw things at one another because the instructions (obviously translated from English to Japanese and then back into English, Jimmy James, Macho Business Donkey Wrestler-style) didn't make any sense. The Adams boys are more skilled at writing than handyman work, and we struggled to assemble the darn thing. My girlfriend (who later, miraculously, ended up marrying me) sat, horrified, watching as her future husband and brother-in-law fussed and fought and argued over this seemingly simple task.

Eventually, we got it together. Back then, the leather was crisp, the chair smelled somewhat sophisticated, there was no creaking, and the chair's lift mechanism worked like a charm.

The chair that almost started an Adams Civil War survived two different apartments and several years in our condo. However, the leather is now beaten and split, the chair no longer smells somewhat sophisticated, there is creaking, and the lift mechanism no longer works.

So today, I said goodbye to my good friend, my very first writing chair. Together we started seven novels (and finished five of them, including what will soon be my first published novel) and wrote more than 40 short stories (about a dozen published, several more rejected).