E is for Events. 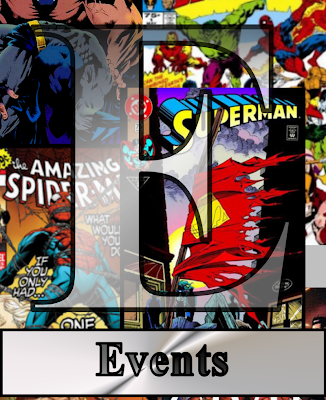 Sometimes a character needs a shot in the arm. Sometimes your continuity has become so convoluted, you decide it's time to start fresh. Sometimes you need to attract attention by killing a fan favorite.

These are just a few of the reasons comic book companies publish "events." At the end of the day, they give us multi-issue, multi-series story arcs in hopes of selling more comics. That's what "events" are for superheroes: a way to utilize popular characters in a way that engages readers and sells more comic books. You can't tell me this isn't the reason we see things like One More Day and Blackest Night. You can't tell me that isn't the reason DC killed Superman or Marvel "assassinated" Captain America.

It's a cynical outlook, but it's also true. Yet, events also give us some of the most famous images in all of superhero-dom. When Superman died, the cover gave everyone the chills; Superman's tattered cape fluttering in the dead wind. Batman getting snapped like a Kit Kat over Bane's knee. These are images that stay with readers. One of the most famous events, Crisis on Infinite Earths, was a way for DC to eliminate decades upon decades of confusing and sometimes conflicting continuity.

An "event" comic often comes with a few key points:

That's a loose guideline and not every event follows suit, but the ones I've read seem to include those elements. Knightfall, for example, doesn't involve a world-ending threat (it's Bats vs. Big Bad Bane), although the future of Gotham City and the mantle of the Batman are on the line.

Sure, events are intended to sell comics, and some of them can be disappointing. However, it's usually a lot of fun to see most of the major heroes and villains come out of the woodwork for one grand adventure.

Tomorrow: He wears red. Blink and you'll miss him.

D is for Dr. Fate
C is for Captain America
B is for Batman
A is for The Avengers
By Matt Adams at January 23, 2012