Godfather Quotes: from Book to Screen 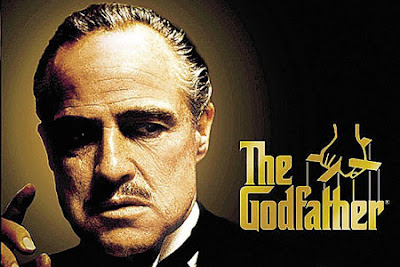 After doing some book revisions and churning out a short story or two, things have quieted down on the writing front. I'll be getting back to a more regular writing schedule soon, but my brief break gave me the chance to do something I've been meaning to do for years.

I finally read The Godfather.

I didn't see the film until college, when a brilliant friend of mine decided the DVD box set was something I abso-freaking-lutely needed. Man, was she right! After watching all the movies, about a million different TV and movie references finally made sense!

I think I got the box set in 2000 or 2001...which means I finally got around to reading the book a decade later. Mario Puzo's The Godfather is considered a modern classic. What it lacks in subtlety it makes up for in strong characterization and complex plotting. What struck me about the book is the amount of dialogue pulled directly from it and used in the movie. A friend reminded me that this should be an obvious concept, since Mario Puzo collaborated on the screenplay.

Still, the movie follows the book closely in many respects, with the flashback scenes from The Godfather: Part II culled from the pages of Book III of the original work. As with any book-to-movie adaptation, some sacrifices had to be made, such as the subplot involving Sonny's mistress (truly, in the book world, The Godfather: Part III never happened...it couldn't have). Johnny Fontane is a bit player in the movie, but has much more prominence in the novel, including subplots about his return to Hollywood and the introduction of one of Johnny's friends to the Hollywood scene. Al Neri has a very interesting backstory that isn't touched upon in the films; reading the book makes Neri a very compelling character.

Despite these differences, the movie has a lot of dialogue that's word-for-word or close to it, including some of the film's most memorable lines.

"No Sicilian can refuse any request on his daughter's wedding day." In the movie, Tom Hagen mentions this. In the book, it's Michael who says it.

"And if by chance an honest man like yourself should make enemies then they would become my enemies. And then, they would fear you." This is very close to the exchange Don Vito Corleone has with Bonasera in the book. The entire Bonasera conversation is an echo of the book. In the movie, of course, it's edited for content and to run in the allotted time.

"Tattalgia's a pimp. He could've never outfought Santino." This is word-for-word from the book.

"Consigliere of mine, I think it's time you told your Don what everyone seems to know. " A slight variation from the book, after Santino gets killed on the causeway.

"I want no inquiries made. I want no acts of vengeance. I want you to arrange a meeting with the heads of the Five Families. This war stops now." Again, the movie errs on the side of brevity, but makes the same point as the book. The original passage:

Tessio: Can you get me off the hook, Tom? For old times' sake?"/Tom Hagen: "Can't do it, Sally." Pretty much verbatim from the book (although the movie adds in a couple lines of dialogue from Willi Cicci during the exchange, which starts with Tessio complaining that his arrangements are getting messed up).

"Thank you for the dinner and a pleasant evening...Mr Corleone is a man who insists on hearing bad news at once." Taken directly from the book. Much of Woltz's rant about the movie role making Johnny a star is also verbatim, although some is slightly rearranged from the book.

"But I'm a superstitious man. And if some unlucky accident should befall him - If he should get shot in the head by a police officer, or if he should hang himself in his jail cell - or if he's struck by a bolt of lightning, then I'm going to blame some of the people in this room, and that I do not forgive. But, that aside, let me say that I swear, on the souls of my grandchildren, that I will not be the one to break the peace we've made here today." A surprising amount of this exchange during the meeting of the Five Families is right from the book, although the Don's speech is quite a bit longer:

"I am a superstitious man, a ridiculous failing, but I must confess it here. And so if some unlucky accident should befall my youngest son, if some police officer should accidentally shoot him, if he should hang himself in his cell, if new witnesses appear to testify to his guilt, my superstition will make me feel that it was the result of the ill will still borne me by some people here. Let me go further. If my son is struck by a bolt of lightning I will blame some of the people here. If his plane should fall into the sea or his ship sink beneath the waves of the ocean, if he should catch a mortal fever, if his automobile should be struck by a train, such is my superstition that I would blame the ill will felt by people here. Gentlemen, that ill will, that bad luck, I could never forgive. But aside from that let me swear by the souls of my grandchildren that I will never break the peace we have made."

"I think your brain is going soft with all that comedy you are playing with that young girl. Never tell anyone outside the Family what you are thinking again." This is a rearrangement and simplification of the book:

"Santino, never let anyone outside the Family know what you are thinking. Never let them know what you have under your fingernails. I think your brain is going soft from all that comedy you play with that young girl."

And of course, one of the movie's most famous lines, "Leave the gun. Take the cannoli," isn't in the book at all. Depending on which story you believe, Richard Castellano (Clemenza) ad-libbed the line or Mario Puzo/Francis Ford Coppola included it in the screenplay.
Posted by Matt Adams at 2:50 AM