The New Species of Rogue with Anne E. Johnson

Take it away, Anne!

“A romance in the picaresque style offers a good deal that is not a little amusing.”

When the British literary critic John Ballantyne wrote that in 1810, he invented a very useful term. “Picaresque” refers to any novel in a style dating back to sixteenth-century Spanish fiction, featuring a picaro, or rogue. Henry Fielding’s The History of Tom Jones - A Foundling and Hunter S. Thomson’s Fear and Loathing in Las Vegas are seminal English-language examples, although they were written more than two centuries apart.

I should hasten to add that, in 1810, “romance” did not mean love story. It meant adventure story. So a picaresque novel is an adventure about a rogue or rascal or trickster. These stories also normally have a main character who travels around a lot, allowing him to have far-flung adventures and play the rogue to many different people.

Which brings us to Green Light Delivery. I’ve been mulling over whether my novel can be considered picaresque.

Green Light Delivery offers plenty of adventure. There are intriguing and dangerous techno-gadgets. There’s reckless driving on water, land, and air (or in vacuum, as the case may be). There’s gang warfare and a mysterious lunch buffet. Everything an adventure-seeking reader could want.

The main character certainly does his share of traveling. Webrid, a carter who delivers goods for a living, has a laser implanted in his skull at the beginning of the story. Turns out it’s a delivery job, and he spends the whole novel wandering around, even planet-hopping, in search of the client who ordered the stupid thing.

So far, so picaresque. The big question, though, is whether Webrid can be considered a picaro. Unlike most classic rogues and tricksters, Webrid is not terribly cunning, although he does get himself out of a few scrapes. Fortunately for him, he has the good sense to surround himself with very smart friends to help with the heavy thinking.

But Webrid does have a biting tongue on him. Two tongues, actually. And his sarcastic quips in every situation and against every species he meets are enough to make him seem a pwetty wascally alien.

And there’s no denying his roguish eye for the ladies, even the ones with suction cups. So I say, yes. Webrid qualifies as a picaro.

And what about Ballantyne’s claim that a picaresque novel should be “not a little amusing”? As Webrid’s grandfather used to say to him, “People will laugh when you tell ’em you’re a carter, boy-o.” I sincerely hope he was right.


Green Light Delivery is available from the following retailers: 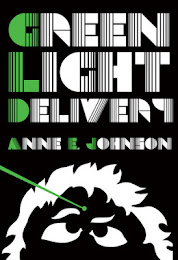 Webrid is a carter, like his mother and grandfather before him. It's not glamorous work, but it pays the bills, and it gives him time to ogle the sexy women on the streets of Bexilla's capital. Mostly, he buys and sells small goods and does the occasional transport run for a client.

Then he gets mugged by a robot.

Now, with a strange green laser implanted in his skull and a small fortune deposited in his bank account, Webrid has to make the most difficult delivery of his life. He doesn't know who his client is, or what he's carrying, but he knows that a whole lot of very dangerous people are extremely interested in what's in his head. Literally. And they'll do whatever it takes to get it.

With the help of some truly alien friends, a simple carter will journey across worlds to deliver his cargo. And hopefully keep his head in the process. 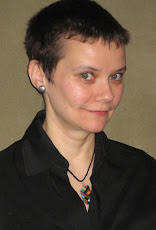 Drawing on an eclectic background that includes degrees in classical languages and musicology, Anne E. Johnson has published in a wide variety of topics and genres. She's written feature articles about music in serials such as The New York Times and Stagebill Magazine, and seven non-fiction books for kids with the Rosen Group. She has published nearly thirty short stories, both for adults and kids.

Greenlight Delivery (Candlemark & Gleam) is her first science fiction novel. She is also a children’s author. Ebenezer's Locker, a tween paranormal mystery novel, was recently published by MuseItUp. Her tween medieval mystery, Trouble at the Scriptorium will be released by Royal Fireworks Press in August.

You can learn more about Anne E. Johnson on her website.