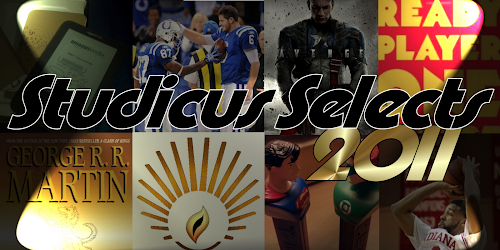 A while back, I abandoned my longtime Blogger nickname "Studicus" to become "Matt Adams." The thinking, of course was to better promote my writing by no longer posting via a pseudonym. It was actually kind of a tough decision because some college pals and I started a collective blog in 2005 called The Flying Trapeezius.

Those days were fun!

In order to keep writing, I decided I had to leave TFT and all three of its readers and replace it with My Kingdom for a Novel and its three readers. Yet, a tradition is a tradition...and for every year except 2006, I made a "best of" list called "Studicus Selects."

So here we go!

(You can check out the Studicus Selects archives below. Scroll past the links for this year's picks)

Best Tech Gadget: Amazon's Kindle. Really, it's not even close. The other gadget I purchased this year was a rather buggy Motorola Atrix 4G, so the Kindle wins by default. This is a great device. I understand it's a dedicated e-reader and things like the iPad and Kindle Fire are far superior pieces of tech that sparkle and shine and play pretty videos. However, the Kindle is simple to use and no one can match Amazon's content pipeline. From a reading standpoint, it doesn't hurt my eyes because there's no backlighting. From a writing standpoint, it's great because I can email my manuscripts to the device and read my works in progress without sitting in front of the computer for hours. 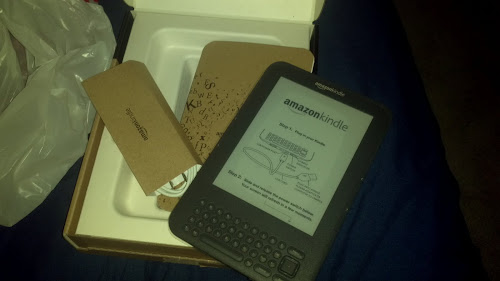 Most Awesome Blog Moment: Ernie Cline, author of the bestselling book Ready Player One agreed to do an interview that I could post along with my review for the book. I thought it was really neat for him to take the time out of his schedule to do that, especially since my blog is in its infancy. It should be a reminder to all writers: no matter how insignificant a blog/interview request may seem, even if you don't think it will reach many readers, you may as well do it. After all, you have to win this battle one fan at a time. You can read the review and interview with Ernie Cline here.

Most Satisfying Moment of the Year: Without a doubt, it was the email I received at 9:49 pm on July 19. I had submitted my novel I, Crimsonstreak to Candlemark & Gleam, a small press operating out of Vermont. It was kind of a Hail Mary because I didn't think anyone would be interested in the book. I was surprised, however, when I received an email saying C&G wanted to acquire the novel (after a few revisions, of course). It was a defining moment in my young writing career; a moment I'll always remember. The book is due out in May 2012. You can read more about the journey from first draft to contract here.

Best Early Anniversary Trip, Historical Category: In July, my wife and I took some vacation time and spent a week in Springfield, Illinois as an early fifth anniversary gift. I'm sure that's the very first place people think of when they think of a vacation spot. Anyway, we saw the Lincoln Museum and our 16th president's home. It was a fantastic trip (we even caught a showing of Captain America!) made even more fantastic thanks to cameos from traveling buddies Green Lantern and Superman. 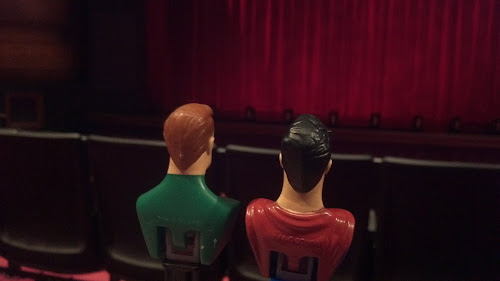 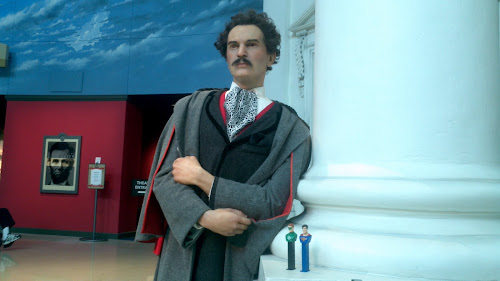 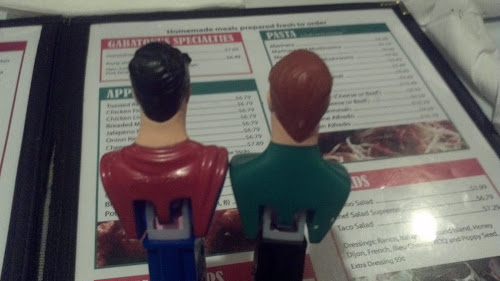 Favorite Summer Movie: Without a doubt, Captain America. I loved it! The film was by far my favorite of the movies I saw this summer. Everything just seemed to "click" in this one. After a few cinematic disappointments (X-Men Origins: Wolverine and Green Lantern), it was great to see a movie come together so awesomely! I liked it so much, I blogged my 20 Favorite Cap Moments. 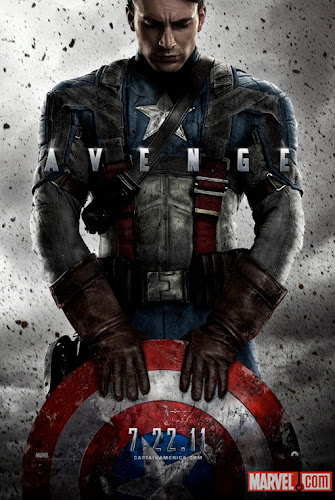 Most Irritating Earworm: As much as I loved Cap, "The Star-Spangled Man with a Plan" was stuck in my head for weeks.

But this category is a tie! I saw a video for Selena Gomez's opus "I Love You Like a Love Song." It is easily the most irritating song I've heard all year. And for a month, it wouldn't leave my head.


The fact that I know the words--ALL of them--makes me want to hurt myself.
Best Discovery, Xbox 360: I've thoroughly enjoyed the Marvel Pinball tables for Pinball FX. I really like the Wolverine and Spidey tables. Blade is a nice change of pace, but I'd like to punch the Iron Man table in the face. Seriously. It's an irritating table to play. Perhaps there exist pinball wizards who love it, but I'm not a big fan.

Biggest Letdown, Sports: The Butler Bulldogs made it to their second consecutive national championship game, but couldn't pull off the upset against UConn. The frustrating thing about the loss was the feeling that Butler just had an "off" day. UConn played well, no doubt, but Butler was atrocious from the field, putting on a shooting performance that was historic in its futility. It was heartbreaking to see a team that had accomplished so much have such a terrible game.

Biggest Letdown, Writing Career: After having three stories accepted in various anthologies, the publisher cancelled two out of the three anthos. This was disappointing because I loved those stories and was looking forward to seeing them in print. On the plus side, one anthology forged ahead and will get published soon. The editor of one of the cancelled books found another publisher, but it's going to be released much later than originally thought. Still, a release is better than no release.

Most Insane Undertaking, Reading Category: I heard such good things about the Game of Thrones series on HBO that I decided I'd read the books. I heard they were long and had seen the paperbacks in the bookstore, but nothing really prepared me for the size and scope of the books. I borrowed them via a Kindle library loan...and wow. I had just 21 days to finish a 1,000-page book. I'm a fast reader, but trying to "race" through a book in the A Song of Ice and Fire series wasn't one of my best ideas. You can read my review for A Game of Thrones here.

Most Insane Moments, Indiana Hoosiers and Indianapolis Colts Category: These are both probably too recent to include in a year-ender, but Christian Watford's shot that propelled IU over top-ranked Kentucky was one of the year's best sports moments. 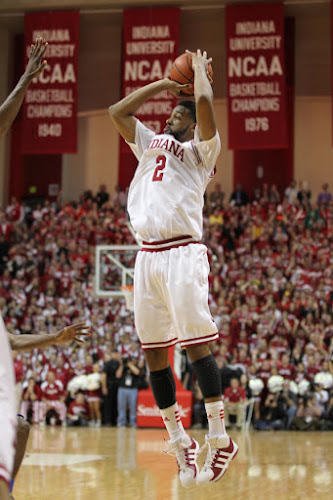 I still have this on my DVR.
My hapless Colts also managed to get a win last night, prompting this strange scene in which Reggie Wayne and Dan Orlovsky tried to give each other the ball after they connected on a late touchdown to seal the team's second win. 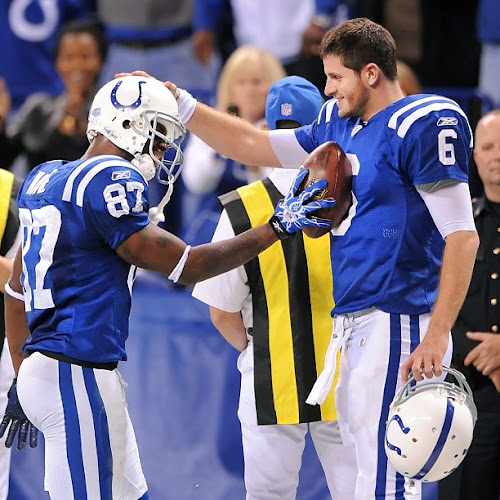 In a season in which nothing has gone right, this was a nice moment.
That's my brief review of the year that was 2011. These are exciting days ahead on the blog. I'm eagerly awaiting the arrival of Empire State for my Kindle and will have an interview with author Adam Christopher soon. You can expect the "ABC's of Crimsonstreak," a series that will continue the legacy of my "ABC's of Writing" and "ABC's of Star Wars." I'm sure my publisher and I will have some awesome treats as the publication of I, Crimsonstreak draws closer.

And of course...we'll be watching for the return of Super-Manning! 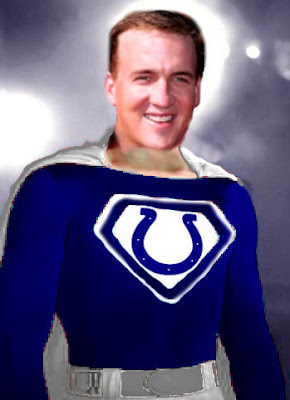 I sure hope he's able to return. If he can't...you can expect lots of inconsolable crying and a terrible video montage set to "Wind Beneath My Wings."

Merry Christmas and a Happy New Year to everyone!
By Matt Adams at December 23, 2011