Captain America: The First Avenger (henceforth known simply as Captain America or simply Cap) was my favorite movie of the summer.

Really, it wasn't even close, and I saw most of the big summer movies (with a few exceptions). I can't explain exactly why I love the character of Captain America so much, but I do. I guess it's that classic never-say-die American individualism the character embodies. He's a simpler hero from a seemingly simpler time; Stars and Stripes embodied. Oh...and my brother and I used to play the heck out of this Sega Genesis game: 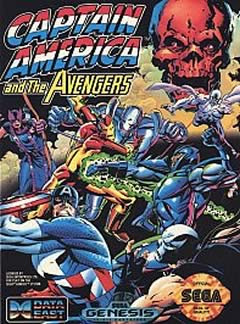 I was almost always Captain America in this game. My brother almost always used Iron Man. Hawkeye and Vision were usually on the bench.
Casting Chris Evans was a masterstroke. I was skeptical at first ("They're casting the Human Torch as Cap!?"), but Evans was awesome. Square-jawed, principled, dogged pursuer of justice and right. Yeah, pretty much exactly what Captain America is all about. An underdog who fights for the little guy and always puts others in front of himself. And he throws a freaking shield.

I never did a formal review of Cap, but I'm sure it would rate very high on the Ray Liotta Quality Meter. Yeah, I'd imagine Field of Dreams level on that storied scale.

So, to celebrate the release of Captain America on Blu ray, I proudly present my Top 20 Cap Moments.

Red Skull & Raiders of the Lost Ark. Joe Johnston, the director of Cap, also served as a second unit director on a little movie called Raiders of the Lost Ark. So, he has a bit of experience with the World War II Era (his other little movie, The Rocketeer, also helped here). Sometimes, Cap almost feels like what Indiana Jones would be if he were a cape & cowl/tights & flight type of hero. I love this little nod to Raiders, where the always-reliable Hugo Weaving says, "And the Fuhrer digs in the desert for trinkets."

All day, baby. Pre-Cap Steve Rogers is a sickly, scrawny little guy with a bulldog's heart. When some jerk starts yelling over newsreels in the movie theater, Steve won't have any of it. After getting punched, he gets up. And again. And again. And again. "I can do this all day," he proclaims. You kinda believe him, until he finally goes down and gets rescued by his buddy Bucky Barnes.

Five times the embarrassment; five times the heart. Steve Rogers doesn't want to kill Nazis; he wants to go out there and fight for his country, which he believes is every man's right. But he's asthmatic, weak, and would be instant cannon fodder. Still, a certain undefinable greatness runs deep in his veins, something Dr. Abraham Erksine recognizes. He's not interested in Steve's 4-F status...but he is interested in the young man's drive to join up.

Room for Improvement. Tommy Lee Jones' Colonel Phillips walks among the trees while looking for the man who will become the ultimate super soldier. Yet, there's something wrong about the lineup. "General Patton says that wars are fought with weapons but won by men," Phillips says. "We are going to win this war because we have the best men." [disappointed look at scrawny Steve Rogers] "And because they're gonna get better."

Listen to the Boy! When a Hydra agent kills Dr. Erksine and tries to escape with the super soldier serum, the now-buff Steve Rogers chases after him. Eventually, the Hydra agent takes a kid hostage (how brave) and then throws him into the water (even braver!). Cap starts to rescue the kid, who assures him he can swim and implores him to chase after the bad guy!

The Star Spangled Man with a Plan. The movie's most charming sequence is when Steve, still not allowed to fight in the field because of the value of his genetic material, becomes part of a nationwide tour to sell war bonds. The song is memorable and eternally catchy. I dare you not to sing along:


Who’s strong and brave, here to save the American Way?
Who vows to fight like a man for what’s right night and day?

Who will campaign door-to-door for America,
Carry the flag shore to shore for America,
From Hoboken to Spokane,
The Star Spangled Man with a Plan!

We can’t ignore there’s a threat and a war we must win,
Who’ll hang a noose on the goose-stepping goons from Berlin?

Stalwart and steady and true,
(see how this guy can shoot, we tell ya, there’s no substitute!)
Forceful and ready to defend the
Red, White, and Blue!

Who’ll give the Axis the sack, and is smart as a fox?
(far as an eagle will soar)
Who’s making Adolph afraid to step out of his box?
(He knows what we’re fighting for!)

Who [waked the giant that napped in] America?
We know it’s no-one but Captain America,
Who’ll finish what they began?
Who’ll kick the Krauts to Japan?

The Star Spangled Man with a Plan!
(Who’s strong and brave, here to save the American way?!)

Cap's Right Stuff. His first "mission" turns out to be a successful, and the triumphant Captain America struts to camp with the Howling Commandos in tow.

Captain America Throws His Mighty Shield! Cap doesn't throw his shield every five seconds in this movie, which is a good deal for everyone. The moments he does throw it are big ones. And. It. Looks. So. Good.

The Idea Men. After Peggy Carter gives Cap's new shield an unconventional lab test, both Cap and Howard Stark are speechless. I love their exchange in which they're too stunned to do anything except look at Carter as she walks away.

Steve Rogers: I had some ideas about the uniform.
Howard Stark: Whatever you want, pal.

Show a Lot of Things Happening at Once... After Captain America rescues the captured soldiers, Col. Phillips decides it's time to unleash America's new champion on Hydra. Thus, we get a superheroic montage of Cap & Company ransacking Hydra installations.

Stan the Man. Eventually, Cap snubs the congressman who turned him into a dancing monkey. When Steve skips out on a medal presentation, the congressman's lackey comes out instead of Captain America, prompting a confused (and always cameo-reliable) Stan Lee to comment, "I thought he'd be taller."

Consider the Gap Minded, if Anachronistically So. When Cap & Company go after Dr. Zola, the good Captain informs his team that the timing is very precise. Just a "ten-second window" he tells the guys. "Mind the gap," James Montgomery Falsworth replies.

Awkwardly Delicious. Tommy Lee Jones chews the scenery (and literally so in this scene) with the captured Dr. Zola. Love his delivery all the way through this one, but the line "that would be awkward" gets a laugh every time.

You're Right, Red Skull. Americans Are GREAT at This. "Arrogance is not a uniquely American trait, but you do it better than most." Really, the only person who could ever rival American arrogance would be a demonic, red-skulled "scientist."

But She Will! I love this nice, light moment before the movie's grand finale. After Peggy and Steve kiss, Cap looks at Col. Phillips. "I'm not kissing you!" he says.

Hero Down. A new life ahead of him, perhaps a lifetime of love. Yet, there's only one way for Captain America to save the world, and that means leaving everything behind...his friends, his country, and the woman of his dreams. He sacrifices everything to preserve them, as a true hero should.

Howard's Command. Howard Stark's search teams find the Cosmic Cube, but Howard Stark doesn't care. I love how this line ("Just keep looking") is delivered with both hope and bitter undertones; a searcher determined never to give up on Captain America.

As He Was Before, So He Shall Be. I thought this was a really nice touch. Instead of seeing a picture of Captain America decked out in his heroic gear, Peggy's last image is that of Steve Rogers, the man inside. I think that was an important choice.

Nap Time. Steve Rogers stumbles into Times Square, which probably looks like something from a B-movie serial to him. Yet, this is the real world now. "You've been asleep, Cap," a surprisingly empathetic Nick Fury says.

Check the Calendar. Confused, Steve's first thoughts turn to Peggy Carter and the dance that never was. Poignant, sad, and perfect.
Posted by Matt Adams at 4:34 AM