This is shaping up to be a very big week.

Today, of course, marks the start of National Novel Writing Month. I've never participated, and this year continues that trend. I plan to try next year because it sounds like a lot of fun.

It's simply not feasible this year. I'm elbow-deep in writing a sequel to I, Crimsonstreak. I hit another big milestone last night, reaching 70,000 words for that book. I'm thinking the first draft will be about 80,000 words...and that's just the main narrative. Like the first book, I plan to write a bunch of supplemental material to expand the universe. That will probably add another 15,000-20,000 words. I've also left some space in the main story for a few flashback vignettes, which I used to good effect in the first book. So the sequel will end up being a bit longer than the original. Of course, it's just a first draft, so I will have to do a lot of cutting, trimming, and expounding.

A few weeks ago, I decided I wanted to power through the George R.R. Martin fantasy series "A Song of Ice and Fire." I'm not much of a fantasy reader (I'm mostly a general sci-fi type), but A Game of Thrones (my review here) was very good. I'm about 400 pages into A Clash of Kings right now. I'll have to finish it quickly; the library has also made A Storm of Swords available after I put in a hold request. With a 21-day lending limit on the library ebooks, it takes a little dedication to get through those massive tomes.

Between books in "A Song of Ice and Fire," I finished Ready Player One by Ernie Cline. The book came out this summer to quite a bit of fanfare, and it's definitely merited. I emailed the author, who has agreed to do a quick email interview with me on the blog. So when I write up my review for Ready Player One, I'll have a "Take Five with Ernie Cline" to go along with it (side note: I put an interview request in with George R.R. Martin, but I'm not crossing my fingers on that one).

I'm also the proud owner of my favorite movie of the summer: 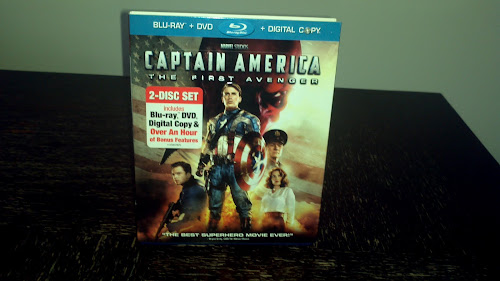 I haven't done a formal review of Captain America: The First Avenger, but I did recap the summer's other superhero movies here.
Posted by Matt Adams at 12:48 PM