I present "Ten Things I've Learned about Writing So Far."

1. Self-publishing is now a viable career path. Even a year ago, people thumbed their noses at writers who published their own books.

"Not good enough for the Big Six," they would scoff. "Obviously not talented enough to write anything I'd read."

I used to think this way about my own work. If no one wanted to publish it, why would anyone buy something directly from me? But publishing has changed. We've seen mid-list writers find success; we've seen unknown writers become veritable "rock stars" with 99-cent books...all without the aid of a traditional publisher.

Self-publishing isn't the path you have to take, but it is a completely viable option for doing what you love. 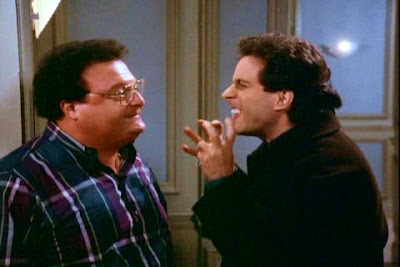 I've softened my stance significantly on this curious internet invention (of course, as I say this, Google+ spreads its Googly tentacles throughout the internet). I have met other writers on Twitter, I have corresponded with editors and publishers, and I have "discovered" books on Twitter.

If you're not on it, you need to be. If you're shy, you don't have to necessarily interact (although you'll miss out on some of the benefits). But the amount of information shared and the way you can specifically tailor it to your own interests is too good an opportunity to pass up.

To be honest, I wish I could spend a little more time on Twitter, but my regular job makes it difficult to give it as much time as I'd like.

3. Treat writing as a hobby, and it stays a hobby. Treat it like work, you can make it into a career. This is premature, as writing is not a career for me. It's more like that second job you take, except it pays very little (and sporadically when it does pay!).

Writing is work. Sure, you're sitting in front of a computer or jotting stuff down in a notebook, but there's real, tangible work that goes into it. In addition to the actual writing part, there's social networking, blogging, and the fun office work that comes along with it.

I'm not the most consistent "2K a day" guy out there (and I envy those who are!), but to make writing something more than a hobby, you have to treat it that way. Some will tell you to "clock in and clock out" at a certain time or produce "X" number of words a day. I certainly aspire to write a little something each day.

The stories don't write themselves and they certainly don't promote, revise, or submit themselves (if my stories do attain sentience, I'll let you know and then we'll run for it together).

4. The path is a progression, not immediate success. And it's kind of like a Choose Your Own Adventure book. Maybe you are the exception. Maybe you've written something so wonderful and unique that "someone important" sees it and passes it forward to "someone even more important."

But that's not how it works in most cases.

I started out trying to query novels and didn't find much success.

Then I tried submitting some short stories and didn't find much success.

I kept submitting stories, and then experienced a little success. No matter how small the publication, getting published is an accomplishment to be proud of.

Now, I'm working on my novels again and keeping short stories in mind. Other writers will take different paths--perhaps a pitch at a writing conference kickstarts them or a chance meeting with an agent or an insanely well-done blog post leads somewhere. There's self-publishing, too. Being a non-fiction expert. Writing magazine articles/freelancing toward a writing career. 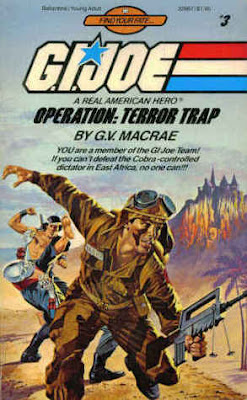 Wait...this is a "Find Your Fate" book...not a "Choose Your Own Adventure." But Quick Kick's taking care of Destro, so we're good.
PAGE 52: You can now move on to point number five.

5. The "other stuff" is important, but focus on the writing. It's why you're doing this. Blogging. Tweeting. Facebooking. Tweeting. Networking. Sending query letters. Submitting stories. Writing book reviews. Critiquing other writers' work. Going to writing conferences. Learning ebook formatting. Stalking agents. Stalking publishers. Hiding in the bushes outside a famous writer's house in hopes of getting a blurb.

Distractions can easily derail even the most dedicated writer. It's my understanding that publishers are giving less and less support to newer writers. Thus, writers must become their own strongest advocates.

It's also enough to make your head explode. We spend so much time talking, writing, emailing, and tweeting ABOUT writing that we experience lapses in actually writing. The temptation to talk shop, ruminate on characterization and the finer points of grammar, and stake out our small claim in cyberspace overpowers the prose.

6. Be proud of your work. If you take pride in your work, people will notice.

If people say your writing stinks (and they will!), be proud of your creation and explore ways to improve it. By doing this, you take even more pride in your work by proving you're willing to do anything to make it better.

Don't be embarrassed by the type of writing you do. I'm primarily a science fiction/fantasy and (cough) superhero fiction writer. See that cough there? It's an automated response to the reaction I think I'm going to get from people when I tell them I write superhero stories. I've gotten over it.

Sure, some people will thumb their nose at genre writing. That's okay. But don't ever think you're "not a real writer" because you create something entertaining. Not every story has to unravel the deep, dark secrets of human nature. Sometimes people just want to sit back and enjoy a good story.

7. Support other writers, even if it's just in small ways. Take a chance on a self-pubber's book. That 99 cents you just spent may be the sale that brightens their day. Leave a review--an honest one--about your experience with the book.

Tweet them back on a day when they seem down, as if the world itself will fold over and crush them.

Give 'em a retweet for a link or article you find helpful.

8. Reading is as important as writing. Watch the skilled wordsmiths at work, and you may just improve your writing. Read a book that's not "quite there," and you'll also find it improves your writing.

This can be frustrating. Sometimes I have a hard time shutting off my inner editor/writer.

Why did she use that word?

Why did he decide to have the character do that?

Reading someone else's work helps give you perspective and may even spark an idea ("I want to write something like THAT!"). You have to enjoy reading; otherwise, you won't be as effective of a writer because you end up writing in a vacuum. And that...go ahead and groan...sucks.

I want my work to sell me, but it doesn't quite work like that. I can't put a book on Smashwords or Amazon or Barnes & Noble and watch it abso-freaking-lutely sell like hotcakes. The name "Matt Adams"--while a synthesis of two very common first and last names--is unknown. No one can read what they don't know exists, thus the "buy me on Smashwords!" tweets and the "I have a store!" posts on the blog are inevitable.

I made a Facebook author page this week and had to like myself in order to see my own posts in my Facebook feed. I was convinced that would create a fissure in the space-time continuum. It didn't. Or at least it hasn't happened in this dimension, although it's entirely possible it caused a rift that we've all forgotten thanks to a terrific retcon. Somewhere out there, "Author Matt Adams" spins in infinite nothingness and curses "Real Matt Adams" for "liking" his Facebook page (please pass the Excedrin).

Anyway, the point here is that being able to network and get people to notice your work without ramming it down their throat is an admirable quality. If you have it, I'd like to buy it from you. Please.

10. Fail once, try again. Fail twice, try again. Fail twenty more times, try twenty more times. Quitters never win. Winners never quit. A wise man on the internet once said that 99% of getting published is perseverance with the other 1% being the actual writing. While this quote sounds almost real--it's not because I just made it up--it carries an intrinsic sense of truthiness. 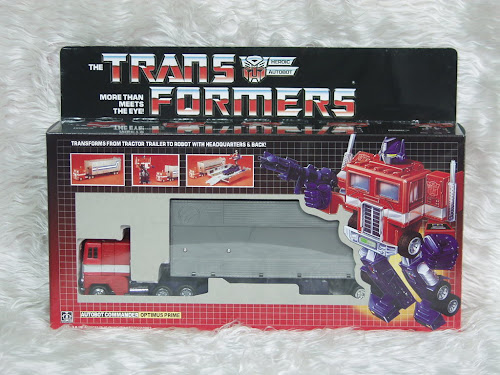 Best. Transformer. Ever.
Eventually, for the sake of being able to sit comfortably and your mother's delicate sanity, you stop asking. You know it's not gonna happen (at least...not until Christmas. Maybe.).

As a writer, you can't be like that little kid who may or may not be me (or an analogue of the perpetually moribund and infinitely spinning Author Matt Adams).

You have to keep trying.

Persistence is NOT futile. You will experience your share of setbacks, but revise and keep submitting. Eventually, you'll smooth out a piece of work so wonderfully, someone's bound to pick it up.

What about you? What have you learned so far?
Posted by Matt Adams at 3:10 AM