Listen, Taco Bell is not fine cuisine.* You don't go there to have your taste buds stimulated by nuanced, hand-crafted fare that you can't find anywhere else. Truth be told, there's probably another Taco Bell around the corner anyway.

A lot has been made this week of a lawsuit filed against Taco Bell and its "beef." Specifically, the lawsuit claims the Bell's beefy offerings don't legally qualify as beef. The class-action suit alleges that the fast-food chain's "seasoned beef" contains only 35% meat...which falls outside the FDA's definition (the FDA says "beef" must contain at least 40% meat to be considered "beef"). The suit claims the rest of the beef-like-taco-filling substance is preservatives and filler.

(Side note: I'm more creeped out by the fact that something has to contain only 40% meat to be considered beef, but perhaps that's just me)

Taco Bell of course, is defending its product by issuing a statement and threatening a countersuit. The company says its beef, referred to in Taco Bell's inner sanctum as "taco meat filling," contains at least 88% meat. I'm sure there's a complicated formula involving a slide rule and all that.

The motive behind this tale of (obvious joke) where's the beef? The law firm suggests that the Bell does this to save money. And really, there's a good argument there. If I can sell you a taco with "35%" beef instead of one with "88%" beef, I'm saving a boatload o' cash on beef.

(Again, I long for the day when we get 100% beef, which Taco Bell says would taste just like ordinary ground beef because it'd be missing all those signature, zesty spices that bring its "taco meat filling" to less than 100% meat level!)

Saving money is the Taco Bell way. Got two bucks? Get a meal, yeah, with a side and a drink! Need a feast? Got about ten bucks or so? Buy a Taco Bell Party Pack! That's 12 crunchy shells filled with either 35% beef or 88%-beef-taco-meat filling! Taco Bell doesn't offer caviar, snooty wine, or cloth napkins. I'm not suggesting that the Bell carves up and liquefies human flesh. Of course, I also love that by saying "I'm not suggesting," I'm really saying, "I'm suggesting." But in all seriousness, this isn't Soylent Green. 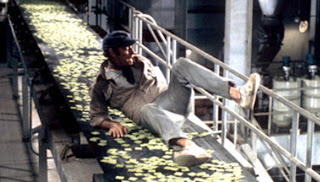 The original was great... 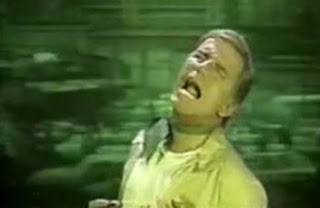 But Phil Hartman's version was even greater! Especially the sequel: "Soylent Green is still made outta people! They didn't change the recipe like they said they were going to! It's still PEEEEEEEEOPLE!"
You have to understand the slippery slope this lawsuit has now placed Taco Bell on. First of all, you'll note the "Berry Pomegranate Fruitista Freeze" contains a whopping 1% actual pomegranate juice. Now, I'm a guy who knows his pomegranates, and I can tell you that's not a lot of juice. I think future Taco Bell menus will look something like this mock-up for their Fiesta Taco Salad: 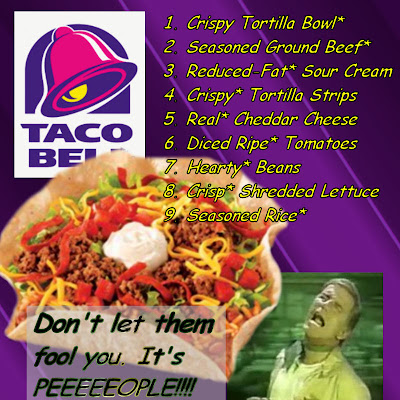 What do all the asterisks mean?

1) Crispy Tortilla Bowl - This claim may not be verifiable. After all, no one played in a "Crispy Tortilla Bowl" in December or January. Nor did they play in the "Anne Adams Oogly-Boogly Bowl Presented by the Benjamin Harrison Home" or the "Matt Adams Manute Bol Benefiting Sudan."

3) Reduced-Fat Sour Cream - It's white, doesn't really have a flavor. That's because reduced-fat is the complete opposite of "flavor-enriched." I prefer "Mexican-style Cool Whip-like cream topping."

5) Real Cheddar Cheese - By "real" they mean the bags they pour the stuff out of are real. Okay, I'm sure the cheese is, too.

8) Crisp Shredded Lettuce - "Sporadically hacked slime-greenery." The great thing is, sometimes it's crunchy, sometimes it slides right down. You never know what you're going to get!

9) Seasoned Rice - Okay, this one probably didn't need the asterisk. It's rice. It has flavoring...or seasoning if you must.

Email ThisBlogThis!Share to TwitterShare to FacebookShare to Pinterest
Labels: is it beef or taco meat filling, soylent green is still made outta people, taco bell, the rant, where do Taco Bells come from