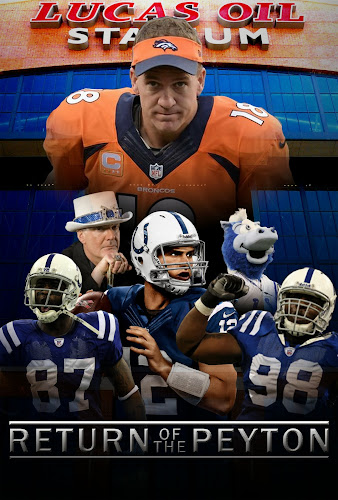 Heroic Homecoming. The video tribute to Peyton Manning was a thing of beauty. For the most part, I've dealt with his departure well, but seeing him get a warm reception from the fans and realizing it had an impact on him got to me. Peyton Manning is a great quarterback who, if circumstances had accommodated, would've played his entire career with the Colts. But his injury, his contract, a terrible season, and the chance to pick the next franchise quarterback all factored into the decision to let him go. He's found a good home in Denver, but he'll always be a Colt and we'll always love him.

This one belonged to the defense. Denver has been pretty much unstoppable all season, yet the Colts slowed them down, particularly in the first half. While Peyton went off in the second half, the defense came up with two timely turnovers that preserved the game. I know Indy gave up 33 points, but they played big when they needed to.

Won't lose back-to-back games. The best thing I can say about the new regime is that they're resilient. After a lackluster performance last week, the Colts responded with a huge game in prime time. In front of a national audience, the city welcomed Manning back while the "new" Colts showed how they want to win games. This win was major in the suddenly muddled AFC and helped the Colts take a two-game lead in the division.

Andrew Luck. His first half numbers were huge, while his second half numbers weren't. Still, the Colts quarterback showed the grit and mettle we've become accustomed to, staying elusive in the pocket and picking up yards with his legs when necessary. The guy needs to take some sliding lessons, though. He looked like a wounded baby gazelle on ice the one time he slid.

Robert Mathis. After years of having Manning in a red shirt that made him untouchable, Robert Mathis got to sack Manning twice, including a game-changing sack/fumble that resulted in a safety and completely turned the game around. Mathis was credited with four quarterback hits for the game, and when Denver left him one-on-one with a lineman, he typically made them pay.

Conflicted fans. This was one of the weirder games I've ever watched, and I got the sensation that the crowd felt the same way. Some people wanted Manning to come back and kick the Colts' butt, others wanted to see him play a good game but lose, and I'm sure there were some out there who wanted the Colts to dominate the game. I think, oddly enough, the game managed to hit all those points.

Running away with it. At one point, the Colts looked like they were going to run away with this one. They led 36-17 after Adam Vinatieri nailed a 52-yard field goal. Colts fans were feeling it, and the Broncos looked too out of sync to manage a comeback.

Not running away with it. Then, the game turned. Denver scored back-to-back touchdowns and the Colts were clinging to a lead. Just like that, it looked like Peyton was going to out-Peyton his old team.

Trent Richardson. I keep looking for good things to say, but I have to look really hard. Every time he gets the ball, he gets buried by the defense. Sunday night, he had 14 carries for 37 yards and a fumble that turned a convincing win into a nail-biter. Is it going to click for this guy? On a third and one play in the first half, Denver stacked about 80 guys in the box. This would've been a perfect time for some play action or misdirection, but they ran a power play and Richardson went nowhere.

3rd and 11. Nothing was bigger than Andrew Luck's third down scramble that turned into a first down. The play set up a touchdown to Stanley Havili, giving the Colts the lead for the first time of the night.

Laying down the #Boomstick. Pat McAfee lived the dream, absolutely unloading on diminutive Broncos punt returner Trindan Holliday in Mario Harvey fashion. Not too long ago, the Boomstick was the Colts' leading special teams tackler, so it's good to see he's still got good form.

The Fleener Drive. The defense got a huge stop just before halftime, and Luck led the team on a big touchdown drive to go up 26-14. The big factor in that drive, shockingly, was Coby Fleener, who caught three passes for 31 yards, including a 21-yard reception in which he helicoptered over Broncos defenders (without fumbling). The drive ended with a walk-in eight-yard TD catch. After dropping a sure touchdown last week, it was a big rebound for Fleener in a crucial situation.

Kevin Vickerson is a terrible human being. By my count, Kevin Vickerson was flagged for three big penalties (twice for taking his helmet off in the field of play if I recall correctly). The biggest bonehead play of the night was his loving "chest bump" on Andrew Luck on a second and eight incompletion. The penalty got the Colts out of bad field position and awarded them a first down when chomping clock was key. It was a stupid play; Vickerson clearly had time to pull up and then decided he'd knock Luck down instead with a little chest bump action to show us all how tough he really was. The bonehead got what he deserved, and if I were the Broncos, I'd cut him immediately.

The Never-Ending Punt. The Colts tried really hard to punt at the end of the game, but penalties kept taking time off the clock. Here's the line:

After all this, the Colts took a timeout so their beleaguered special teams unit could take a breath. Al and Cris joked that the whole thing was great for the Colts because they took something like 30 seconds off the clock.

Fumble? Not a fumble? Who recovered it? What is going on? Please, someone tell me. I had no idea what was going on when the Broncos fumbled in the red zone in the fourth quarter. Al Michaels didn't know what was going on. Cris Collinsworth didn't know what was going on. Then, all of a sudden, they said the referees gave the ball to Indy, yet we never really saw or heard a call down on the field. Then, they said the Colts couldn't challenge the play because they couldn't prove they had possession. A second later, they suggested maybe John Fox would challenge the play since the Colts had recovered (leading me to say, "There was a fumble? The Colts recovered? What are you talking about?!"). But turnovers are automatically reviewed up in the booth, so I think Al and Cris were just filling airtime. I don't know. I'm still confused.

Ten defensive backs? Could we have fifteen? Injuries mounted in the second half, with Darius Butler, Josh Gordy, and Vontae Davis all getting nicked up. This helped Denver find some holes in the passing game, as a few players were in unexpected situations and/or a little gimpy while trying to cover their guy.

Reggie Wayne Knee Watch, Day 1. Really, the fourth quarter was bad for the Colts. Nothing was worse than seeing Reggie Wayne go down on a big third and one play. He clutched his knee, howled in pain, and was inconsolable on the sideline. I hope it's just a sprain, but it didn't look good. Reggie's an iron man; hell, he's Ageless Reggie Wayne. The guy brings it every practice and every game. Luck and the Colts need him if they hope to make a playoff run. We'll be thinking about ya, No. 87. I also wonder what Peyton thought when Reggie went down. I know that's something he didn't want to see.

Crazy finish. About midway through the third quarter, it didn't look like the phrase "onside kick" would mean much, but Peyton kept things close.

DHB still can't catch a cold. Man. He's fast, he gets open, and he can't come up with the big play. Maybe, like Fleener, he'll find redemption. For now, though, he's simply a fast guy with mediocre receiving skills who makes the occasional play.

Great pass rush. The Colts were all over Peyton, hitting him ten times and sacking him on four occasions. They were able to get pressure in key situations, including a sack that led to a safety and another pressure that forced an interception. The defense also brought Manning down on the Broncos' final drive of the game, forcing a field goal and a desperate onside kick.

LaRon Landry: The Cleaner. Landry was all over the place. It's been unnerving to see him miss so much time since the Colts made him a big free agent acquisition, but he certainly has a presence on defense. His ability to make open-field tackles on short pass plays is uncanny and prevented at least a couple Denver first downs.

Defense and special teams. I don't know if you followed the pregame hype, but Colts owner Jim Irsay suggested that maybe the Colts didn't put as much emphasis on defense and special teams as they should have when Peyton played for Indy. What I got from it was that Peyton was such a good quarterback, he covered up those inadequacies. Those comments kind of became a big deal. It seemed fitting that defense and special teams factored so heavily into the Colts' success in this game. Manning, meanwhile, plugged away as always, throwing for 386 yards and three touchdowns. If only his bonehead teammates (Kevin Vickerson and Ronnie Hillman, I'm looking at you) could get out of his way.

Fourth and two! C'mon, show it! During the pregame show, several of the commentators shared some of their favorite Peyton Manning memories. Hines Ward regaled us with tales of the infamous game in which Mike Vanderjagt missed a field goal so badly, the ball still hasn't returned from the Phantom Zone. Collinsworth reminded us all of the great "Fourth and Two" game in which Bill Belichick, stuck with a crappy defense and a red-hot Manning, went for it on fourth and two deep in Patriots territory. The result: Kevin Faulk bobbled the ball and the Colts made the stop. Manning ended up winning the game. Unfortunately, they never showed a replay, but I had this tucked away in the archives:

Finally, our national nightmare is over. Peyton came back, the fans welcomed him, he almost pulled off a signature comeback, Andrew Luck answered his ten millionth question about what it's like to replace a legend, Peyton answered his twenty millionth question about what it's like to be back home, and we can stop talking about it for the rest of the year...unless the Colts and Broncos meet in the playoffs. Sigh.