The Colts and Jaguars square off Sunday in Jacksonville.

Indy destroyed San Francisco during a dominating 27-7 win that "woke up the monster." Now, the Colts head to sunny Florida to challenge a hapless Jacksonville squad headed straight to nowhere and considered the worst team in the NFL.

The numbers tell the story on offense. The Jaguars are dead last in total offense, 29th in passing offense, and 30th in rushing offense.

By contrast, the Colts are 12th overall in total offense, 27th in passing offense, and 4th in rushing offense.

On defense, the Jaguars are statistically better: 19th overall and 9th against the pass. But they're last in the NFL in rushing defense, giving up 167 yards per game. They've also scored only 28 points his season while giving up a whopping 92 points. Their 9.3 points per game is last among NFL teams.

Defensively, the Colts are 14th overall (by yardage), 11th against the pass, and 26th against the run. Indy averages 22.7 points per game--17th in the league. 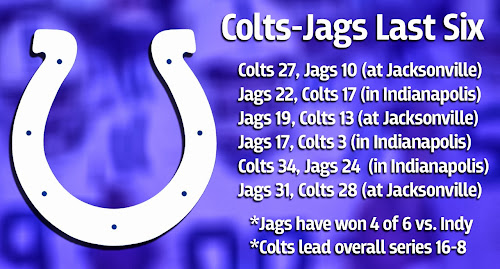 So recent history is on the Jags' side, although it's worth mentioning two of those wins came during the "Lost Year" in which Curtis Painter and Dan Orlovsky started at QB (Kerry Collins made a cameo that season, but not against the Jags).

The X-factor in this game is Maurice Jones-Drew. He's a certified Colts killer and has been since coming into the league. Check out his last few performances against Indy: 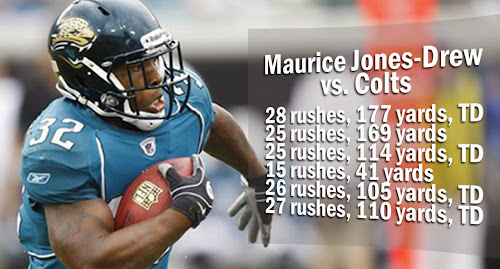 Jones-Drew gives Colts defenders fits; I don't expect that to change, especially if the Jaguars can get anything going with their passing game. They will start Blaine Gabbert after turning the offense over to Chad Henne. Gabbert has yet to show NFL-caliber quarterback play, but he is evasive and could be a handful if he ever learned to make an accurate throw.

On the Colts side, Reggie Wayne has been a perennial pain in the butt for the Jaguars. Jacksonville just seems to be one of those teams Wayne excels against no matter the personnel. Maybe it's the Florida connection; I can't say for sure. 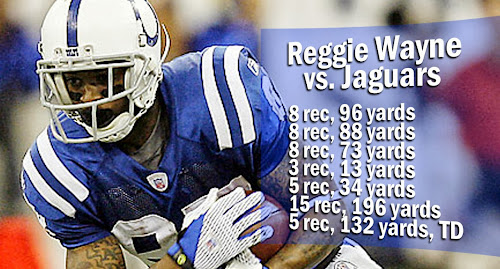 Realistically, the Colts shouldn't have any trouble with Jacksonville; the Jaguars are a bad football team made worse by new ownership, a new GM, and a new head coach. It's not because the new leadership is incompetent or terrible at its job; it's the reality of transition in player personnel, philosophy, and game management. The Jags are where the Colts were a few short seasons ago--except their franchise quarterback is nowhere to be found.

Jacksonville has always given Indy problems--take last year's early loss at Big Oil, for example. I just don't see that happening again this week given last week's phenomenal performance and the sense that things are starting to "click" for the Colts. The Jaguars are in too much disarray right now, though I expect they'll win a game or two later this season.

I fully expect the Horseshoes to win this one and enter next week's tough home game against Seattle at 3-1.
By Matt Adams at September 25, 2013