Writing a Novel: The Duel with Ideas

Inspired by a post Chuck Wendig wrote earlier this week on his approach to writing a novel, I thought a little more about my own method of writing a book. Wendig is prodigious in his output (a 10,000 word day...one day?!) and has become a rising star thanks to his excellent blog and wise use of his Twitter account (as long as you can embrace his "Wendigian language," which I suppose isn't for everyone).

So, how do I go about writing a novel?

It starts with ideas. I have them and I don't know where they come from. I only know that sometimes I'm sitting around and something pops into my head that must absolutely come out. Sometimes I fight with these ideas. These fights include swords or lightsabers and dramatic music.

Instead, the music reaches a crescendo. The idea stands over me, taunting me. Telling me this is it, this is the end.

In this moment, I realize I'm not the epic hero I imagined myself to be. I'm an inadequate swordsman.

The idea makes ready the killing blow. Before delivering the strike, it offers me a deal: "Write me and live."

Uncomfortable with the alternative, I cave. I make promises I hope I can keep knowing full well that this idea--the one that stands with the self-assured smile of a triumphant opponent--will absolutely own my soul until it burrows its way out of my mind and surges through my very blood. The story pours forth through a series of days. A 500 word day. A 1,000 word day. A 2,000 word day. Occasionally, I reach the heights of 3,000 words or (gasp!) 5,000+ words.

The story owns me.

That's what it feels like. That's why, non-writer friends, we can never answer the question "Where do you get your ideas?" The answer takes us to a dark place where we have met our weak, corrupted, cowardly soul--a place we do not wish to revisit unnecessarily. 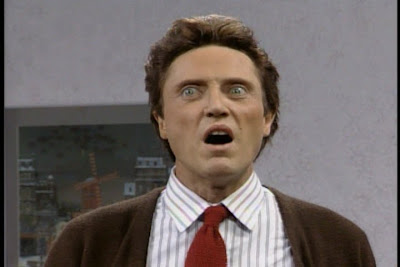 Okay, okay. That's a little dramatic. Plus, it leaves out a lot of the other things you need to do in order to fulfill that blood contract with an idea. Trust me, if the act of writing simply boiled down to exorcising mind demons on the page without any additional work, writers would have it easy.

Here are a few more things I do while writing a novel:

Logline/Pitch. I tend to work well with concepts so I like to come up with a logline or pitch. It could be a simple book comparison (it's Watchmen meets The Firm) or something more conceptual (the new girl at a superhero-for-hire business teams up with a masked vigilante to uncover a conspiracy involving ray gun-toting squirrels). This helps me refine the tone of the book.

Outline. I'm not a detailed outline guy. I don't go chapter by chapter outlining key events and every single plot point. Some writers do this--that's fine. Instead, I try to figure out the progression of my story. This helps me find my themes and character beats. If I have an idea for a big "moment," it'll have its roots in the outline.

Choose an ending. I don't start a book without knowing how I'll end it. Is that ending set in stone? Of course it's not. As the book progresses, characters will start to take things over and shape the course of the narrative. The intended ending could get some tweaks or may get thrown out all together. I think of this as a road trip; I know where I'm starting and the ending tells me where I'm going. Anything can happen in between. As in an actual road trip, you have to stop to fuel up. You see a great outlet mall. You decide to stay an extra night in that quaint bed and breakfast. That's all part of the journey.

Daily writing plan. Nothing writes itself. What separates authors from people who like to write is that authors sit down and do what they need to do. Can I write 5,000 words every single day? No...I don't have time for that. Can I get 800? A thousand? As long as I have about 45 minutes or so, the answer to that is yes. Everyone's mileage will vary here, but the key is to sit down and write the darn thing.

Word count projection. I ballpark all my novels in terms of word count, but I'm not beholden to a specific one. If I plan on 80,000 words and the story ends at 79,999, no big deal. If it ends at 83,000 words, no big deal. I like to set a goal because it gives me something to aspire to.

Character sketches and world building. I can't draw worth a lick, so when I "sketch" a character out, I mean I do it in words. I often write bios of key characters and map out important events. In the case of the Crimsonstreak series, these have become part of the book in the form of appendices. These things are extras, but they help everything feel more tangible to me.

First draft, then drawer. Once the first draft is complete, I pop open a bottle of bubbly because I'm finished and never have to worry about writing more. Oh wait...it's the exact opposite. When the story reaches its conclusion, the first draft concludes. I take that draft and put it away for a week or two and try not to think about it. I don't literally throw it in a drawer (I write on a PC!), of course.

Make it suck less. First drafts stink. They're terrible. The problem is that most writers don't think that's the case. It's our "baby," right? After keeping the draft in a figurative drawer, I go back and read the whole thing. I use a Kindle keyboard for this, making notes I sometimes don't understand because the Kindle keyboard is terrible. Still, I go through and look for inconsistencies, weak characterization, and poor plot points. I may do this two or three times before I feel like I've wrangled the book.

Let others make it suck less. After I go through the book, I send it to some readers who make notes and tell me why I'm a terrible person. They ferret out inconsistencies that I didn't catch, identify points where the writing is unclear or weak, and analyze the plot structure. With their notes, I go through another draft.

Last pass. This is a bit of a misnomer because I will definitely have to do more revisions. However, I'll go through the book "one last time" (again while making clumsy notes on the Kindle keyboard) and try to strike out any typographical errors or other mistakes.

Submission. After a few drafts, I'm ready to submit. More revisions will likely be ahead from an agent or editor. I don't have an agent, so I can't really comment on what goes into that...I can only say that I imagine the agent will request some revisions before sending it to an editor. The editor will also likely request additional revisions. The hope is that the novel won't need significant changes, but I'm sure it varies by case.

So there you go...my individual take on tackling a book from start to finish.