How about an actual writing update?

I haven't blogged about writing in a long time.

The last non-Colts post I did was back in June.

There are a couple reasons for that. First of all, I'm a major Indianapolis Colts fan, and I'm using my author website as a place to write about the team. Is it the best venue for that? Probably not, but it's something I enjoy doing. Second of all, I worked myself into a writing slump over the summer.

I finished the first draft of THE EXCLUSIVE--a paranormal novel--back in April. After that, I got out of a writing routine as I tried to figure out what to write next.

I then visited an elementary classroom in June (see this post for more about that). After talking to my niece and nephew, I decided I'd like to write a book that would be age appropriate for them. I dusted off an old, old manuscript I wrote back in sixth grade and reworked THE ADVENTURES OF THE TAXIS into a middle grade novel.

So from April to July, writing was sporadic. You can sense as much from my Facebook updates and tweets. I got into a more steady routine until THE ADVENTURES OF THE TAXIS was finished. I was then faced with the question I hate most: what do I write next? I decided there was a book that had been waiting for a long, long time and needed to get written. It's a ridiculous idea for a novel, but I knew I could have some fun with it.

You know how people always ask writers where they get their ideas and writers don't know what to tell them? Well, occasionally we get our ideas from oddball Facebook comment threads from three years ago: 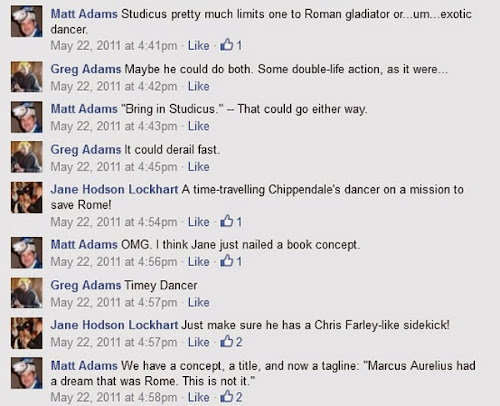 Yeah, that exchange was a thing that happened in a Facebook post in May 2011. Not long after that, I mocked up a cover and wrote a quick blog post about the idea. 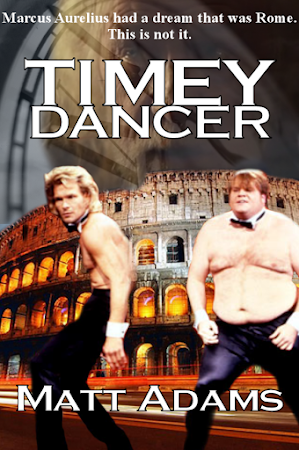 I've held onto that idea for what feels like forever. I decided in late August/early September that I wanted to write that book. So I did! More than 66,000 words later, I have a first draft that tells the story of Russ "Studicus" Chambers, a male dancer at a dingy club called "Front and Caesar." He ends up going back in time on a mission to save Julius Caesar from being assassinated. Thus, the old tagline--"Marcus Aurelius had a dream that was Rome. This is not it."--is no longer applicable.

It just so happened that the intrigue surrounding Julius Caesar's death made for a better backdrop and, I felt, a more familiar setting for readers. I read a few books on Caesar and Rome, and while my book is in no way historical, at least it's not all completely made up for a book about a time-traveling male stripper who introduces pole dancing to Ancient Rome.

So while I have a first draft, the book is nowhere near finished. I've already made dozens of notes and eliminated a character about a quarter of the way into the book so I could consolidate him with another character because they were becoming too similar. Another month or so, and I think I'll have a version of the book that would be fit for a beta reader.

I bet Facebook pals Greg (my brother) and Jane (a friend from school) didn't know we wrote a book together.

So, I'm reading through TIMEY DANCER and fixing it. Now I just have to figure out what to write next, which is my least favorite thing ever.

Before I fret about that too much, let's take a look at what I've done from a writing standpoint this year:


So, that's it...a comprehensive update on what I've been writing lately.
Posted by Matt Adams at 5:27 PM