The Importance of Self-Editing

Although sometimes uncertain of the relevance of my writing advice, I do like to pound out a column here or there on writing process and craft. This isn't expert advice, because I'm not an expert writer.

There is no such thing as an expert writer. Not in academia, not in the editorial department, and certainly not among writers. "Expert" implies someone has mastered the craft and has little else to learn. Anyone who's written a story realizes many opportunities exist within a piece to polish and smooth it out. These changes improve the writing considerably, taking what was once a clunky mess and turning it into serviceable prose. In some cases, these revisions go beyond just serviceable, transforming so-so writing into a breathtaking, organic journey through character, plot, and setting.

Before that can happen, of course, a writer must first transfer the story from the brain to the page. Writing methods vary greatly, from the "2,000 words a day" methodology to the strange world of the Reggie Miller Writing Continuum. My friend Chris from Write Now Indy has an inner editor trapped in his brain who refuses to let him write organically. The mind-melded editor stops him from misspelling a word or constructing a sentence of questionable quality. While admirable, the "head-itor" does not allow for productive writing sessions. Chris' solution, while unconventional, works for him. 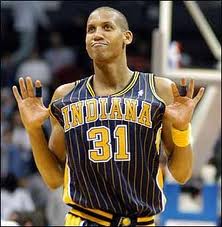 I'm partial to the Reggie Miller Writing Continuum. I'm not only the RMWC founder, I'm also a client!
Once the work is complete--I'm talking about everything from simple blog posts to short stories, novellas, to full-length books--you, the writer, are not even close to finished. It's tempting after months or weeks or even years of writing to send that "hot off the press" story out there. 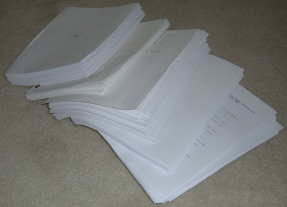 Just-finished manuscripts. All perfect, of course. Ready to be sent to agents and publications... 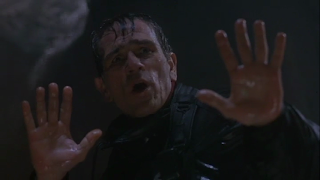 Wait a second. Someone is telling me not to send them...
Don't do it.

Every writer needs beta-readers and every author needs editors, but the first line of defense when it comes to content and quality control is you. If anyone knows your writing intimately, the verbal ticks and words you lean on too often, the character traits and archetypes you put into your work, it's you.

That's both a quasi-tragic and wonderful thing.

It's quasi-tragic because you are an expert in your own writing and can't often see past your own flaws.

It's wonderful for the same reason. If you can learn to step back and brutalize your own writing, your finished manuscripts will have a certain sense of polish to them. It's hard--the story and characters are your babies and you'll do anything to keep them from harm--but necessary. For this blog post, I'm sharing tips I use to improve my self-editing. Of course, these apply to the point after a story is complete. A self-editor who comes out during the creative process is a real pain and should be ignored under most circumstances.

Put it aside, no matter how long it takes. In my experience, the best time to self-edit is several days after you've finished a project. Maybe that should be several weeks or even a month...but you must mentally separate yourself from the story. When you do this, you'll more easily spot grammatical errors, inelegant language, poor plotting, and hit-you-in-the-face foreshadowing that lacks any semblance of subtlety.

Just print it, baby! The "green" among us will hate this one. I don't know about anyone else, but I find spotting my own mistakes from a computer monitor nearly impossible. For every error I catch, three more get a free pass. I think it has to do with the fact I've written the story at the computer and it's a familiar "brain space" for me to read at. I like to print out my stories (yes, double-spaced, I know, I know...I'm an environmental pariah) and read them in a comfy spot, red pen at the ready. My self-editing is much sharper on paper. On the plus side, I've also started re-reading my short stories on my iPhone (thank you, Dropbox!), a practice that helps me spot errors more consistently. I think it's because I'm seeing the work in a different form and relating to it differently.

Activate the T-800 Adverb-inator. Over the past few years, I've read a lot of columns and posts signaling a de facto War on Adverbs. Some call for the outright elimination of adverbs from your writing. I'm not a radical anti-adverb guy, but I do advocate the unleashing of the T-800 Adverb-inator. In many cases, adverbs can be eliminated; sometimes, I realize I'm stringing a bunch of them together. Anytime a sentence starts to rhyme from all the "-ly" words in it, it's time to pare down the adverbs. The less often you use them, the more impact they'll have when you do. 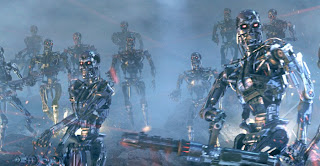 You've been adverb-inated.
"That" doesn't always fly. The word "that" has many uses. The fish was that big. The horse that won the race is from champion stock. That movie was great. It's a good idea that you decided to come. In many cases, the word "that" can go. I won't put a percentage on it, but in an overwhelming number of cases, you'll find "that" can be omitted. Some sentences need it for flow or clarification purposes...and if it feels right to use "that," by all means do it. However, "that" can also clutter up sentences and add the appearance of wordiness. You can easily trim it most of the time.

"Just" cause for elimination. This is more of a personal problem than anything else. I use the word "just" too much. In a recent short story, I had a sentence in which "just" appeared three different times. Since I've trained myself to spot this problem while self-editing, I nipped it in the bud. "Just" is a filler word...a five-cent word Twinkie. It tastes okay, but it won't fill you up. And too much makes you sick. 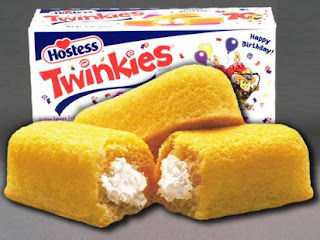 They're just Twinkies.
Comma comma down dooby doo down down... Breaking up is hard to do, but using commas correctly can prove even more challenging. When reviewing my work, I'll spot several places in which I've used commas incorrectly or too often. Nothing is worse than the meandering, paragraph-long sentence that's really a bunch of compound sentences strung together with commas. In most cases, shorter, punchier sentences are easier for readers to follow. This piece of advice is completely dependent upon the type of work you're writing. Perhaps the piece requires more flowery, ornate language. If that's the case, go for it...just learn to spot it when that's not your intention.

Theme show. Listen, not every story starts with some grandiose, life-changing theme behind it. I recently wrote a story about a robotic bounty hunter simply because I wanted to write a story about a robotic bounty hunter. Still, that story ended up with a simple theme: a machine that illogically wanted to become more than its programming allowed. Like it or not, your story has some theme or purpose tied to it, even if it's not explicitly stated. Make sure to identify that theme, no matter how elusive it may be. 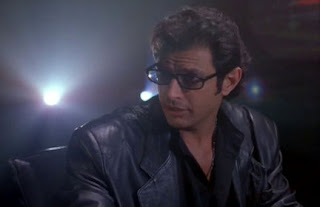 Get some perspective...and make sure you stick with it. One of the first projects I ever wrote employed a first-person narrative. That's hard to screw up. Yet, it's still possible to do it. Your first-person narrator can't know certain things, unless he/she is a mind-reader. When working with a first-person narrative, watch out for writing that states exactly what another character is thinking. In third-person writing, look out for any jarring changes in perspective, especially in stories with multiple points of view. A scene that starts from a certain character's perspective should never deviate from that perspective.

So, what's the consistency? If a character on page one doesn't know anything about baseball and then whips out a baseball analogy on page three, you have a consistency problem. If that character uses a baseball analogy near the end of the story, that could be character development (i.e., a friend is trying to convince a non-baseball fan to learn about the game and the character make strides to learn about the sport). Character traits and motivations should not inexplicably vary from scene to scene or page to page. Think about it like this: your friends, your very best friends, usually won't surprise you with their behavior. You know them well enough to predict what they'll say or how they'll react. Characters, to you, should be like your very best friends. When they do something inconsistent with their personalities, you should be able to identify it with laser-like precision. 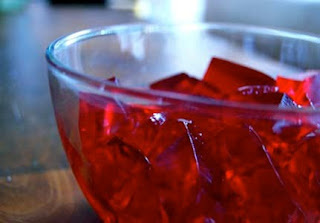 Jell-O: great as a snack, not so great for character traits.
Don't feel too entitled. When I come up with a concept for a story, I usually conjure a speculative title. Sometimes it's very simple; several of my superhero short stories are based around conceits of the genre and get attention-grabbing titles like "The Villain" and "The Journalist." The title I write at the beginning of my story is simply a guideline. Once the story is finished, a theme or line usually leaps off the page, chokes me, and forces me to re-title my work. Other times, I simply end up with what I started with. Every once in a great while, I know exactly what title I'll use and the story writes to it (i.e., the title is the definitive ending point and the story guides my characters to their final destination).

Read it. Out loud. This one comes from my background in writing for TV news. People may look at you funny, your significant other may tell you to shut up, and you may feel uncomfortable. However, this remains one of the best ways to get a feel for the rhythm and flow of your words. Read the whole thing aloud...you'll be amazed at how many mistakes you'll pick up. Why does this work so well? When I read silently, my brain usually fills in missing words. When I read out loud, I don't have that luxury; if the word isn't there, most of the time my brain won't fill it in as I read. Sure, it will reduce you to being "the crazy person" talking in the corner, but you'll be better for it. This method doesn't work well, however, with novel-length works in their entirety.

End it, already. Writing an effective ending (and recognizing when you've arrived there) is one of the hardest things to do. Cat Rambo blogged about story endings earlier this week, and the advice is stellar. A good self-editor feels the pace of the story and understands when it reaches its conclusion. Writers easily succumb to pitfalls like false endings (Return of the King Syndrome--you know, when the story ends like seven times), unnecessary epilogues, and thematic diversions (when the ending doesn't fit what appears to be the theme of the story). Understanding the moment when the proverbial credits should roll remains a skill that must develop over time. 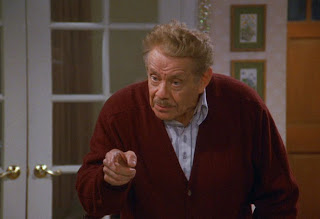 The story doesn't end until you pin me.
It never hurts to have an experienced editor look over your work, so cultivate your inner self-editor as a first step.

Keep in mind self-editing is simply part of the revision process. You always need to have someone with a critical eye look over your work. And if you do know an experienced editor, well, make friends with them!
Posted by Matt Adams at 1:41 AM