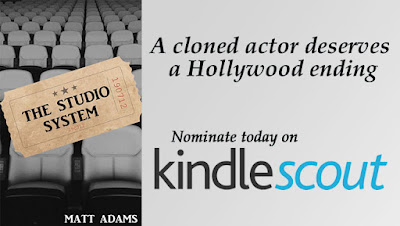 With 2018 here, I'm working to build my brand as an author. That's my most significant goal for the New Year.

Nothing's going to happen overnight, and it's not like I've been sitting back doing absolutely nothing over the last few years. I've written several books (I have 17 finished novels, 14 of which I would say are polished enough to submit somewhere).

I've submitted, I've been through the query trenches, and I've come close a couple times. I'm not giving up on that--seriously, I'm not.

However, as publishing changes, I'm changing my approach as well. I've dipped my toes into independent publishing (aka self-publishing) with a Kindle and print-on-demand version of an anthology of superhero stories. I'm learning the basics of formatting a book and cover design (shameless plug: you can get the Super Anthology on Kindle here or order the print version here).

I have stories I want to share, and I need a way to get those stories out.

Now it's time to try another new tactic: Kindle Scout. I'd describe Kindle Scout as American Idol for books. You take a finished manuscript, come up with some cover copy and a one-line description, and submit it. You then get 30 days to convince people that they should nominate your book. The more nominations you get, the better the chance that someone from Kindle Press will notice it. That could lead to a publishing contract.

I'm giving it a shot with my book The Studio System. Here's the description:


Everyone tells Will Evans he looks “just like” Trent Cary, the Oscar-winning star from Hollywood’s Golden Age. The unassuming video store clerk has never been able to explain his affinity for Cary’s work—especially the regrettable action schlock he made in the twilight of his career. When private eye “Rock” Morrison shows up at his doorstep, Will experiences a twist worthy of a Hollywood thriller: he doesn’t just look like Trent Cary, he’s a clone of the silver screen icon. And he's not alone.

Here's the link to nominate the book!

I'll see how it goes. After the campaign ends, you have to wait a while to see if it made the cut. If the folks at Kindle Press end up selecting it, everyone who nominated the book ends up with a free early release copy on Kindle, which is pretty cool.
Posted by Matt Adams at 3:32 PM