Big win. The Colts needed this one, a quality win on the road against a good football team. They showed us some of the things that had been sorely lacking during an up-and-down stretch of games after the Denver win. We saw the dominating defense and a versatile offense that could move the ball. The offensive line held up well (especially in pass protection).

Turnover battle. The Kansas City Chiefs came into the game +21 in turnover margin. They left the game +17 (-4 vs. Indy). The Colts forced four turnovers: two fumbles and two interceptions. They took care of the ball on their end.

Rough start. The Colts didn't get off to an ideal start. They went three and out on offense after failing to convert a short run on third down. They gave up a 25-yard punt return to the dangerous Dexter McCluster. The defense then proceeded to surrender a 31-yard touchdown run to Jamaal "Two A's are better than one" Charles. Then, another three and out. After they stopped KC, Adam Vinatieri missed a 34-yard field goal. Again, Adam Vinatieri missed a 34-yard field goal. But then...

They got back on track. The defense forced another KC punt, the Colts put together a drive in which Vinatieri nailed a 46-yard field goal, and then Robert Mathis (or maybe Jerrell Freeman...it's hard to tell) forced a fumble by Knile Davis. The turnover took the crowd out of the game and completely turned things around. From that point forward, the Colts completely dominated, shutting down the Chiefs offense and dominating time of possession. Seriously, the Colts held a 38:20 to 21:40 advantage in time of possession.

And they should've had another turnover. Late in the second quarter, Junior Hemingway "caught" a pass and then "fumbled" it. The officials ruled he never controlled the ball (incomplete pass). At first blush, I thought that was the case. Then I saw a replay. Hemingway caught the ball, tucked it away, and took several strides before the Colts jarred the ball loose. This is clear from the review. The officials, on the other hand, let the play stand as called. So instead of another turnover, the Chiefs had a chance to score a field goal (although they ended up missing it).

After the embarrassing blown call in the Bengals game ("The Phantom Touchdown"), I'd like to hear an explanation for this one.

That was a bang-bang play in KC - in real time, you have to stay with the call there.

Wait. I should've specified that I wanted a good explanation. I should've clarified that. If "in real time, you have to stay with the call," then WHY ON GOD'S GREEN EARTH DO WE HAVE INSTANT REPLAY?

Ahem. The Colts ended up being the beneficiary of a couple of calls (including a taunting penalty that kept a drive alive), which I can only say must be a karmic offsetting of this idiocy. I think it's safe to say NFL officials have had a very, very bad year. Who thought things would get worse after TOUCHCEPTION last year?

O Canada. Jerrell Freeman isn't from Canada, but he played in the CFL. Anyway, he was a beast Sunday. He was "only" credited with five tackles, but he had a sack, a QB hit, three passes defensed, a forced fumble, and two interceptions. One of those interceptions came right at the goal line, killing any chance the Chiefs had for a late rally. He has to be the defensive player of the week.

Look there, a pass rush! The Colts harassed Alex Smith all day, finishing with four sacks. Freeman, Ricardo Matthews (0.5 sacks), Fili Moala (0.5 sacks), Cory Redding, and Bjoern Werner all sacked Smith at Arrowhead. It was great to see the interior of the defense create pressure. It's something we haven't seen much this season.

Nothing secondary about it. The Colts were terrific in pass coverage. KC lacks star power in the receiving corps, but Smith is an underrated passer who plays behind a good offensive line. Vontae Davis and company had a fantastic game in coverage. Josh Gordy kept tight coverage on a pass that would've resulted in a touchdown. They were physical and wouldn't let the Chiefs run free downfield. Because passing windows were tight and/or took long to develop, it helped the defensive line feast on Smith.

Bethea brings the lumber. I've heard rumbles that Antoine Bethea is losing it. While he's certainly been beaten a few times in pass coverage, he can still lay the lumber over the middle. He delivered a couple big hits Sunday that rattled my teeth. He helped set the tone on defense, for sure.

Bad, Bad Donald Brown. Sometimes "bad" is good, right? That's definitely the case here. Donald Brown provided two big plays that resulted in touchdowns: a 33-yard reception and a 51-yard run. Both were worthy of the highlight reel, even though the run was the real showstopper.

Richardson Watch. 16 carries, 43 yards (2.7 YPC). 3 receptions, 15 yards. Clearly, Brown was the more productive back (as usual). Still, Richardson was out there in short yardage situations and toward the end of the game as the Colts tried to grind down the clock. I think he's finally settling in, but he's not a threat to break huge runs like Brown. He also picked up a crucial conversion on a fourth down play in the second quarter.

GRIFFNATION! Shame on the Colts for cutting, re-signing, cutting, and re-signing Griff Whalen. While their woes without Reggie Wayne will never disappear, Whalen is a reliable target who makes plays. He led the Colts in receiving (seven catches for 80 yards) and was the go-to guy on third down. He needs to stay on the field. My favorite was the one in which Whalen made two KC defenders collide before scampering for a first down. While we suffered through weeks with David Reed and Darrius Heyward-Bey sucking it big time, GRIFFNATION was reserved to the practice squad. PLAY HIM.

And speaking of DHB... I do hope something good happens to Darrius Heyward-Bey one of these days. He made a couple big special teams plays, dropping McCluster on a punt return and downing a punt at the 5-yard line. It takes a certain type of guy to have his role severely diminished on offense only to suck it up and shine on special teams. DHB, apparently, is that type of guy.

He really read the green well there on the chip shot. Pat McAfee tackled a guy this week. He also had an awesome golf-inspired celebration after pinning the Chiefs deep in their own territory: 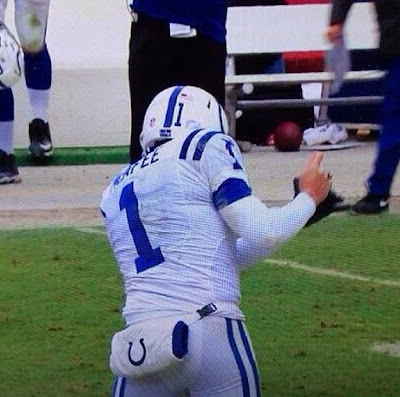 Great adjustment. Andrew Luck found T.Y. Hilton as wide open as he'll ever be. Facing pressure, Luck lofted the ball to Hilton, who made a great adjustment and reeled it in for a 31-yard reception.

Playoffs? Playoffs! The Colts are in (they were in after the Broncos beat the Titans in Week 14). They're not yet locked into a seed as of this writing.

And it's worth mentioning... I still love Peyton Manning. If you were a Colts fan at any time, you want No. 18 to do well. I'm glad to see him take back the single-season TD record. Fittingly, it came against the Texans. Poor, poor Texans.