Post-game of the Future 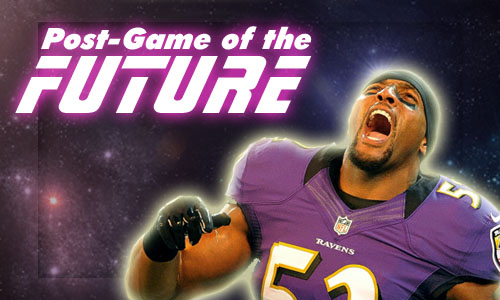 Note: The following is an attempt to predict the reaction following the Colts-Ravens game that operates under the assumption that the Ravens win. It is a purely fictitious representation of what will really happen in the game. Unless this is 100% accurate, in which case that's totally what I meant.

Ray-Ray’s retirement. The Baltimore Ravens play inspired football after Ray Lewis announces plans to retire after this season. His decision sends a stabbing pain through the entire team, which hopes to make a Super Bowl run because anything else would be a double stabbing pain.

Rice, Rice, baby. The Ravens give the Colts a big dose of Ray Rice, one of the most dynamic running backs in the game. After the Colts are unable to contain him, the Ravens commission Vanilla Ice to redub his signature tune with lyrics changed to reflect general Raven-tasticness. Another possibility: Ice targets a lesser-known song, changing the title to “Havin' a Ray-ni.”


It’s Flacco, not Falco. Finally, the best QB no one cares about does something in a big game. Joe Flacco tells reporters he feels unshackled by the dynamic play-calling and outgoing personality of (former Colts coach and current offensive coordinator) Jim Caldwell. “Everything that man does is entertaining and innovative,” Flacco says after the win.

It rhymes with cook. “For the love of Pete, it rhymes with ‘cook,’” insists punter Sam Koch. “This is the last time I’m saying it.”

Not a Bing Crosby song. “Ma’ake Kemoeatu is not ‘Hawaii’s way of saying Merry Christmas to you,’" says Ma’ake Kemoeatu. “Do you understand how offensive that is?”

The Chuck stops here. “It’s been a great story and Chuck Pagano was a valuable member of our staff before he joined the enemy. The magical unicorn of Chuckstrong died today. I know that sounds insensitive, but I’m a Harbaugh,” says head coach John Harbaugh.

Elaine Benes? Elaine Benes. “I’ve never really told this to nobody, but that ‘Seinfeld’ episode where Elaine dances is my primary inspiration,” says Ray Lewis of his famous pregame seizure dance.

Needed more rest. “I think the starters didn’t look fresh for the Colts,” says former Colts GM and future dictatorial headache for another NFL franchise Bill Polian. “With so many young players hitting that proverbial rookie wall, they would’ve been better served to take off week 17. It’s a method that’s proven to work except for that one time we lost the Super Bowl.”

They still let him talk? “And that’s why I think the Colts should’ve traded the first pick and drafted nine receivers, one for each round,” says Mitt Millen, somehow unaware that the NFL Draft involves only seven rounds.

Maybe a bit harsh? “The Ravens are a really likeable team,” says no one ever.