Sega CD Summer launches on October 18. This is the fifth entry in my Meet the Characters Series
While Mr. James Glad is definitely an antagonist, he possesses little of the malice of Mrs. Poole and Archnemesis Ryan Davis, the banes of Tommy Guggenbiller's existence.

While Mr. Glad delights in weaseling his way out of tipping Tommy, Mrs. Loretta Poole lives for giving the poor paperboy the shaft. Although wealthy, she frequently skips out on her bill and is notoriously hard to catch during collection weeks. Let's just say it's no coincidence she's unavailable when the bill comes due. 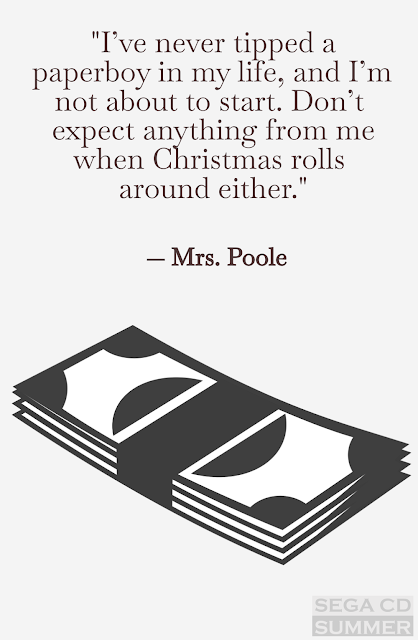 She puts a "no soliciting" sign on her fence to discourage Tommy from dropping by. She makes him wait in the sweltering heat while she "goes to get her checkbook" and never comes back to the door. And she absolutely refuses to remember that "worthless" Benny Simmons is no longer the paperboy after Tommy takes over the route.

A tip from Mrs. Poole? Forget it.

She spends much of her time doting on her fearsome little Chihuahua, Mr. Barkerson. A ten-pound, shorthaired ball of aggression, Mr. Barkerson somehow has even more disdain for people than his master. He snarls and growls at anyone not named Mrs. Poole, although there was that one time he briefly let Tommy pet him. 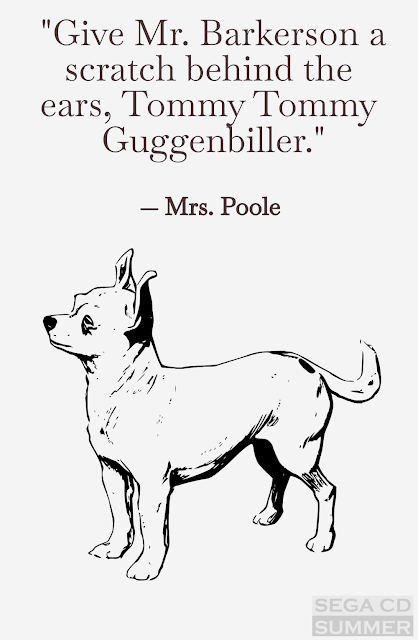 Mrs. Poole's penchant for torturing Tommy isn't personal; she's not nice to anyone except Mr. Barkerson.

It's an entirely different story for Ryan Davis, Tommy's ex-best friend. Tommy and Ryan spent a lot of their childhood together. They played video games all the time, went to each other's birthday parties, and starred on the same baseball team.

For reasons unknown to Tommy, they had a falling out after ending up in different classrooms. Ryan became fast friends with Jeremy Radford, the new kid in town, and dropped Tommy faster than third-period French.

A fierce video game rivalry developed between the two, with Tommy choosing the Sega Genesis and Ryan going all-in on the Super Nintendo. Ryan's inflated sense of self-importance extended to Nintendo's 16-bit console, which he promoted with a reverence bordering on fanaticism (to be fair, Tommy loved his Genesis just as much). 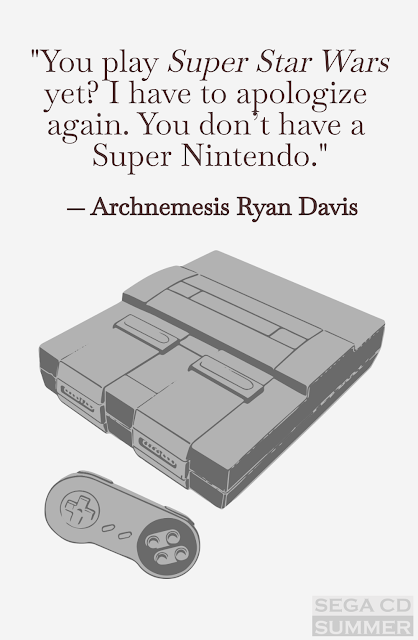 Ryan made Tommy's life miserable, lording over him with SNES games like Street Fighter II and the Super Star Wars series. He took every opportunity to tell his former friend how great the Super Nintendo was and made it his mission in life to poke fun at Tommy's other friends, Kyle and Andy.

On the baseball field, Ryan is one of Wayne County's most talented players, boasting the area's best fastball and a powerful bat. During the events of Sega CD Summer, he ends up on a rival baseball team and serves as the book's main antagonist and Tommy's unconquerable adversary.

Basically, he's just a big jerk in that way burgeoning adolescents can be. 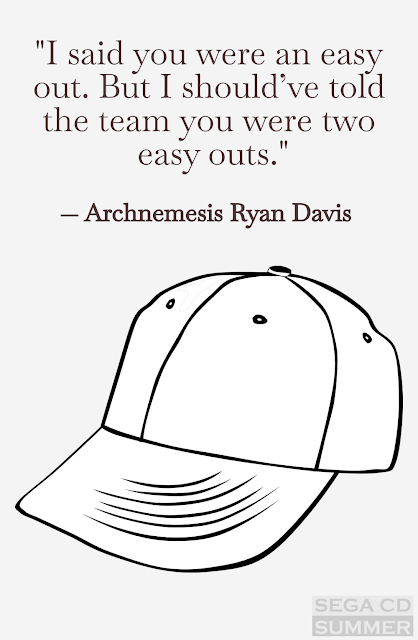 Perhaps Ryan became obsessed with becoming one of the popular kids in school and glommed onto Jeremy Radford. Perhaps his inflated opinion of himself led him down a narcissistic path. Perhaps his unvoiced insecurities turned him into a bully.

Or perhaps he always was one.

Either way, he is Tommy's M. Bison or Shao Khan--the final boss to defeat before claiming ultimate victory.

Superhero games for the Sega Genesis

Sega CD Summer launches on October 18. This is the fourth entry in the Sega Tote Series
When you were a kid, you didn't always have a ton of money to buy new games. They were expensive, after all. Most games had to wait for Christmas, but since I had a paper route, I was able to put some money aside to buy something new on occasion.

I read comics from time to time (and they were often compilations), but most of my "comic book knowledge" comes from the '90s animated shows, which introduced things like "The Dark Phoenix Saga," the symbiote suit, and the origin of Two-Face.

It was only natural (and profitable) for publishers and comic book companies to release superhero games. My collection didn't have a ton of them--I'll cover three that I own--but countless comic books heroes appeared on video game consoles. Victor Lucas over at Electric Playground has a fantastic series of reviews of games ranging from the Genesis to the SNES, NES, and Game Boy Advance, among other systems. Seriously, go check out Side Scrolling Superheroes.

I love this game. At one point, my brother and I got so good at it that we could get through it without losing a life. We never made it through a "no damage" run because the Crossbones battle was extremely cheap. I usually played as Cap while my brother used Iron Man.

The controls in this game are super-responsive. The voice samples are, well, not great, but the music is good. Most importantly, it's fun to play and a couple shooter-like stages break up the beat-'em-up levels. I liked using Captain America because his shield attack felt fast and fluid. Iron Man was a close second, while Vision's and Hawkeye's attacks felt slow.

My brother and I always made fun of the voice on the selection screen whenever one of us chose Hawkeye because, well, it sounded like the guy had something stuck in his throat and had to clear things out, so to speak.

The SNES also got a port. I've read a lot of reviews saying the game is slow and the controls aren't very responsive. That happens without Blast Processing, you know.

My copy probably isn't considered complete in box because the Captain America pin is missing, sadly.

Spider-Man and Venom: Maximum Carnage is based on an extremely '90s Spidey storyline.

The game is a standard side-scrolling beat 'em up--and it's pretty tough. I played the game a lot but didn't get very far. It was nice to be able to use Spider-Man or Venom, although I don't recall many differences between the two characters other than their sprites.

Enemy variety wasn't great. The game featured some nice comic book-inspired cutscenes and followed the comic fairly well, to my understanding. I didn't love the game soundtrack, although I understand some players really dig it.

The most notable thing about the game was probably its red cartridge. I'm not sure how "collectible" the thing was, however.

Another really tough game, X-Men came out in 1993 from Sega. You could play as four different characters: Cyclops, Wolverine, Gambit, and Nightcrawler. A few other X-Men characters, such as Jean Grey, Storm, and Archangel, served as complementary support characters who could attack or provide a useful function.

I could easily get past the Excalibur Lighthouse level using Nightcrawler. After that, though, I couldn't get very far. The game is hard with some blind jumps, confusing level layouts, and powerful enemies. I liked playing it, despite my inability to progress through it.

A few things I remember: you could park Wolverine in a safe area and he'd heal; Gambit was too "tall" for the Shi-ar Empire level and would get hit by laser fire even if he ducked; Iceman's bridge power helped you cheat in the Savage Level. Also, save the help characters for the bosses.

The game is pretty famous for having players press the reset button at a certain point to progress the story. I think people generally consider X-Men 2: The Clone Wars to be the superior game.

Sega CD Summer launches on October 18. This is the fourth entry in my Meet the Characters Series
If there's a villain in Sega CD Summer, it's not Mr. James Glad.

Sure, he's ornery. Sure, he's a prankster. In some ways, he makes Tommy's life as a paperboy pretty miserable. On the other hand, he's a lot of fun.

Mr. Glad lives to torment Tommy, deriding his deliveries as a "motor route" and offering some questionable life advice in the form of "tips." He puts Tommy's picture up in the post office as a "wanted" poster and misleads him about the nature of a certain outbuilding on his property. 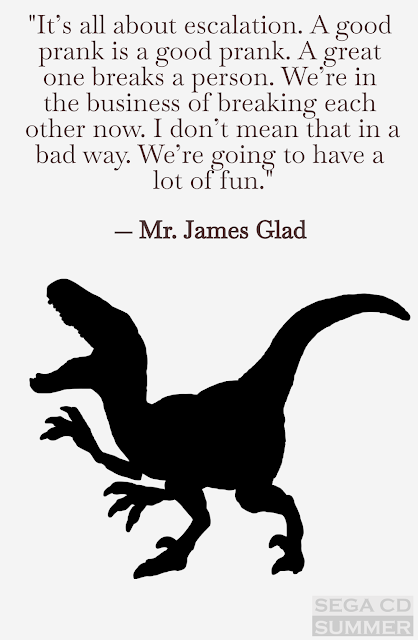 On the other hand, Mr. Glad reaps what he sows. Tommy gets him pretty good a couple of times.

A shrewd businessman, Mr. Glad is a pillar in the Williamsburg community. He once served as commissioner of the youth baseball league and coached his kids when they were younger. The founder of a successful transportation business, he's semi-retired but keeps a finger on the pulse.

With a sharp wit and the innate ability to push Tommy's buttons, Mr. Glad loves to tease his paperboy. He delights in promising him a "tip" only to pull the rug out from under him like Charlie Brown, Lucy, and the football. 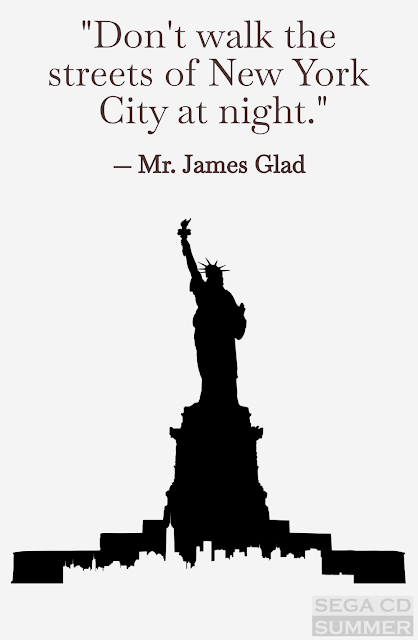 When his community needs him most, though, Mr. Glad steps up. And for Tommy, one of his "tips" finally pays huge dividends.